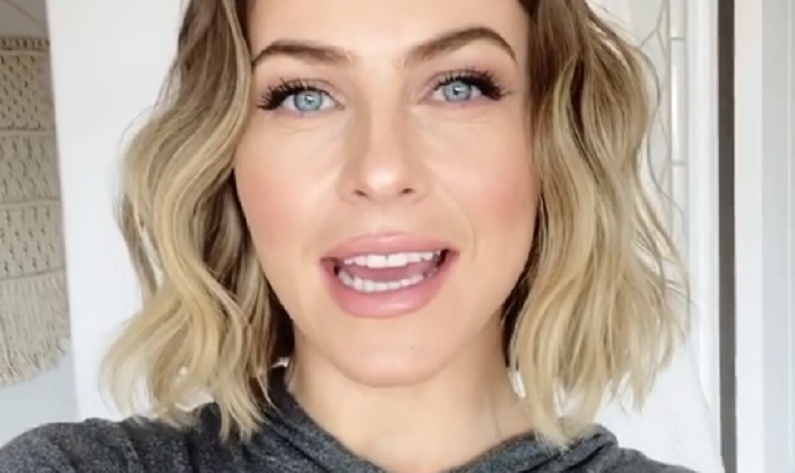 Julianne Hough and husband Brooks Laich were supposed to be socially distancing together. But that’s not the case anymore. Brooks is quarantining in Idaho while Julianne is by herself in Los Angeles. That leaves with plenty of free time.

It doesn’t look like she’s practicing social distancing. The DWTS pro was spotted with actor Ben Barnes in Los Angeles. This comes after Brooks is spending some much needed “me” time in the wild.

There are so many questions here. Who is Ben Barnes? What is Julianne doing with him? And why aren’t they practicing social distancing?

Hmmmmm… I wonder who will be showing up today? 🤷🏼‍♀️• Anyone else feel like this quarantine is bringing out all the versions of yourself at a rapid pace? Riding on a tidal wave of emotions daily? Experiencing the highs, lows, ups, downs, sideways, diagonals and inbetweens? I’m kinda diggin’ meeting all these characters… 😏 I’ve named them all 🧚🏼‍♀️☀️🐉🤦🏼‍♀️😘🤗☄️

Julianne Hough is making the rumor mill talk again. She was spotted walking closely actor Ben Barnes amid the coronavirus pandemic. The 31-year-old was photographed wearing an all-black outfit and socks. Julianne carried her shoes as she showed off her cartoon socks.

Meanwhile, the 38-year-old actor opted for a black t-shirt, gray shorts, and black ankle socks during their latest sighting. She’s practicing social distancing at home while her husband Brooks Laich is quarantining in Idaho. An inside source told People that the couple want to do “their own thing” despite what’s going on.

Who is Ben Barnes?

Fans couldn’t help but notice a different man with her. Some were shocked to learn that Julianne is not taking social distancing seriously enough. The British actor joined Julianne for her walk around Los Angeles. Brooks was nowhere in sight. Fans wanted to know if the two are just friends.

Don’t worry; it’s not what you think. Julianne and Ben have been good friends for years. Sources told Talent Recap that Julianne and Brooks are still very much together. However, Julianne’s Instagram rarely shows photos of her husband. But this is not the first time that the couple has spent time apart.

I know this isn’t easy. Everyone is worried about loved ones, about not having work or structure & in many cases medicine or food. In some places you can’t even go out for a walk & it feels like your freedom is being constricted. But we really don’t have enough to go on yet to know when it will be safe to go to the office or school or the gym or hug & kiss & shake hands again. So for now, stay at home, give hospitals & your health system the space it desperately needs & literally save lives. Be kind & patient with your loved ones. Call your friends. This too shall pass. In the meantime my six degrees of separation are: @nicholashoult @willpoulter @jessie_mei_li @rozzymikes @jonnybernthal @alexgonzalezact #istayhomefor

“Julianne and Brooks were spending time apart in January to reconsider the future of their marriage together, but were unable to make final decisions on what to do,” an insider told E! News.

Divorce rumors swirled after Julianne Hough was seen without her wedding ring last year. It’s hard to tell if she wore her wedding ring in the latest photos with Ben. But it’s clear that Brooks and Julianne are handling their marriage differently than other married couples do.

Ben Barnes is an actor who’s had a successful year. He’s most known for his role of Prince Caspian on the Chronicles of Narnia series. He also appeared on The Punisher on Netflix and the HBO drama Westworld. Sources say Julianne and Ben happen to be friends who have hung out on multiple occasions.

Brooks Laich quarantines with his dog

The former hockey player is hiding out in Idaho with his dog whom he calls his “soul companion” in a recent Instagram post. He’s happy to be out in nature again. What’s interesting is that his Instagram account also doesn’t have any photos of him with Julianne. He’s been mostly posting pictures of himself and his dog lately.

The couple decided to quarantine separately after self-isolating together. An insider told Entertainment Tonight that they wanted to do different things.

Another insider told People that Brooks love being in the snow during this time of year. He’s been “living the simple life in nature, which makes him happy,” the source added.

“Their marriage is not perfect, but they continue to work on it,” the source continued. “They speak all the time. Brooks is coming back to L.a. once the stay-home order is lifted.”

The stay-home order in California has been extended to May 1. Though the couple is apart, they have been working on their marriage.

What are your thoughts on Julianne Hough and Brooks Laich spending the quarantine apart? Sound off below in the comments section.