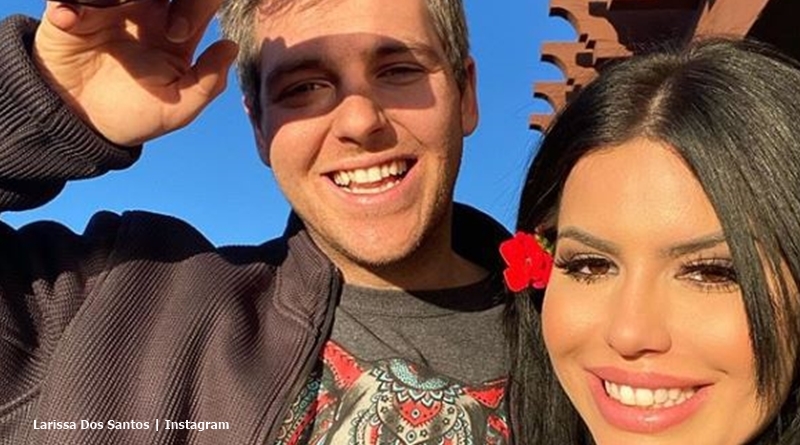 90 Day Fiance fans know that Eric Nichols and Larissa Lima hooked up together after she and Colt Johnson split. Later, they had a public breakup. But we reported back in November that they made up and remain friends. Lately, they seem officially back together and ever so lovey-dovey. Now fans wonder if Larissa’s pregnant. Did Eric hint at that? Or, did he just talk about the COVID-19 pandemic?

90 Day Fiance – Eric talks about a bump – is Larissa pregnant?

On Thursday this week, Eric took to his Instagram and shared a photo of himself. He stood under a road sign that warned of a bump. Eric captioned it with, “We will get through these bumpy times babybump ❤️.” Larissa Lima responded by just writing, “Bummmmp.” Naturally, fans questioned Larissa. One fan asked, “Baby bump? Is that a hint? @larissalimareal.” And, another fan asked straight out, “are you having a baby Larissa? Your pregnant?? Oooohhhh tell us!!! ❤️😍.”

Well, 90 Day Fiance veteran Larissa never answered the question. But several fans noted that recently Larissa’s been wearing her waist training corset. One pointed out, “i doubt shes pregnant as shes currently waist training.. and its not safe to waist train if pregnant.” Another follower wrote, “Do y’all think [larissa] would be doing tight lacing waist training if she was pregnant? I sure hope not!” And these fans make a good point. Actually, waist training wouldn’t be a great idea as it’s known to cause problems with internal organs shifting. So, maybe Eric just referred to the current COVID-19 pandemic.

Waist training or not, the possibility of a pregnancy exists, given their timeline. They made up their differences as far back as November, TV Show Ace reported. We noted that “fans wanted to know if being friends means they might be “friends with benefits.'” Of course, that’s quite possible. Eric shared a post about it on Instagram. But since we wrote our article, he took it down. Nevertheless, at the time, he said, “Larissa and I have managed to work things out and remain as friends.”

More recently, Larissa started getting a bit more open about their relationship. On her Instagram page which used to be full of a zillion posts, she’s cleaned it up a lot. Many of the pictures she shared of her looking happy with Eric since November disappeared as well. Nowadays, she left only 14 photos up that fans can see. The first one the 90 Day Fiance alum left up of Eric now goes back to only March 31 this year. That looked like her official announcement they got back together. That came months after they made up in November. And Cheatsheet noted blogger John Yates shared a fan pic from December 12 that showed them looking very cozy indeed.

So, could the 90 Day Fiance star really be pregnant? It’s possible judging from the timeline despite the deleted photos on Instagram. Or, did Eric just talk about the bumpy road everyone follows these days during the COVID-19 pandemic? Sound off your thoughts in the comments below.