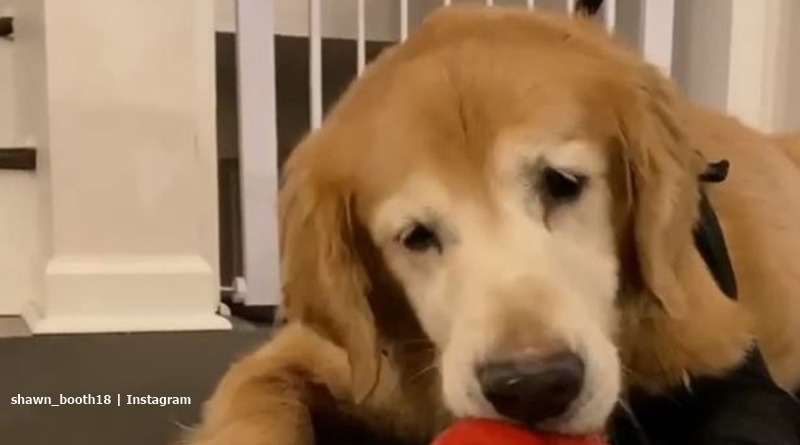 The Bachelorette fans often saw Shawn Booth’s close relationship with his golden retriever, Tucker. Now he announced very sadly on his Instagram, that Tucker passed away. Heartbroken, Kaitlyn Bristowe’s ex poured out his sorrow and grief. Although they split, Kaitlyn. who also knew Tucker very well, sent her heartfelt condolences to Shawn.

In a tearjerking post on Thursday night, Shawn shared a photo of himself with his beloved dog. He captioned it by writing, “With the heaviest heart I’ve ever had, I wanted to let you guys know that I lost my best friend today.” He then explained that he held Tucker in his “arms” as he passed on. The sad event came in his own “backyard.” And here’s the tear-jerker: Shawn wrote, “I poured every ounce of my heart into him and he gave me his entire heart right back.”

The Bachelorette star also revealed his very deep love for Tucker, noting, “I’ve never loved anything more and he was the best boy I could ever ask for.” Plus, he said of his furry friend, “If love could have saved you, you would have lived forever ..” Nevertheless, Shawn’s still grateful he got the opportunity to love Tucker. He described himself as the “luckiest person in the world” as Tucker stayed by his side for over 11 years. Here’s a video Shawn shared of his furry friend just ten days ago:

Some Saturday night quarantainment. Anybody else’s dog polish off a Kong like this?! He’s been around the block a time or two …

Kaitlyn, other fans send their condolences to Shawn

Kaitlyn, who lived with Shawn after their season on the ABC show, obviously understands his grief as much as anyone. She wrote, “I’m so sorry. This one hurts. You gave him a great life.” Well, she loved Tucker as well and at one stage, acknowledged that often, he held the couple together. E!News noted that other people from the franchise also loved Tucker and they sent in their thoughts and prayers as well.

It’s not clear if there’s anyone close to The Bachelorette alum right now to help him through his grief. TV Shows Ace reported in December that rumors arose he might be dating someone else. But in January, he told Life & Style he only dates casually as he focuses on his fitness levels at the moment. Nevertheless, plenty of fans of ABC sent him their love. One fan said, “Literally said “no” outloud before even reading.. I had a feeling. My heart hurts for you. He was so lucky to have you! 💔❤️❤️❤️ RIP Tucker.”

With the heaviest heart I’ve ever had, I wanted to let you guys know that I lost my best friend today. Tucker passed peacefully in my arms and in the comfort of our backyard. I poured every ounce of my heart into him and he gave me his entire heart right back. I’ve never loved anything more and he was the best boy I could ever ask for. I was the luckiest person in the world to have him by my side for 11+ years. I already miss him so much. . “If love could have saved you, you would have lived forever ..”

Another fan of The Bachelorette said to Shawn, “That good boy is in doggy heaven, so sorry for your loss, so glad you got over a decade with him!” Do you agree that all our furry friends deserve a special place in heaven? Sound off your thoughts in the comments below.