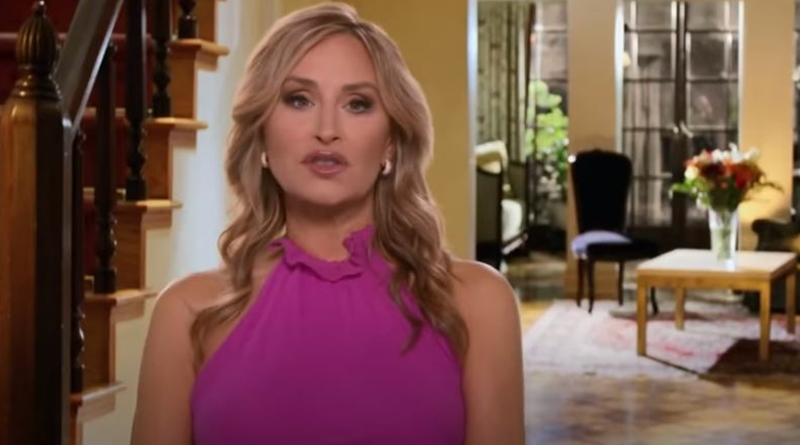 RHONY fans love Sonja Morgan for her quirky and sometimes downright weird ways. On the April 16 episode of Real Housewives of New York, she delivered her usual drama. Slightly tipsy, she gave fans what they came for, and generally misbehaved. But in real “now” time, she’s feeling a bit down. Sonja’s separated from her pooch and her home for the time being due to the COVID-19 quarantining going on.

On Thursday night, Sonja took to her Twitter and posted rather sadly about missing her loved ones. In her post, she wrote, “Missing this guy so much right now. Anyone else separated from their pet during #shelterathome? Ironically I’m stuck away from home& loved ones. But luckier than many. No complaints.” Well, fans pointed out she could go home and just needed self-isolation. But, that’s always a hard call to make. After all, self-isolating might still take the virus to someone people care about.

However, other people who love their animals and family equally agreed it’s hard. One RHONY fan said, “I’d hate that, and so would my pup.

” Mind you it’s nice to see that Sonja’s not wallowing in self-pity. It almost seemed as if her tweet just reached out and shared what’s weighing heavily on her heart right now. And, while she may be separated from those she loves, she stays active. Actually, fans recently saw her remotely on Andy Cohen’s Watch What Happens Live, TV shows Ace reported.

Missing this guy so much right now. Anyone else separated from their pet during #shelterathome ? Ironically I’m stuck away from home& loved ones. But luckier than many No complaints #Marley #rhonydogs #rhony @BravoTV @RaquellePedraza @CesarGStyle @marco_m57 @JonathanValdez pic.twitter.com/4B5Twm47YR

Locked away, most fans of the Bravo franchise either binge-watch old seasons or settle down for entertainment from currents shows. And this week, People reported that she delivered enough drama to entertain most people. In the episode on Thursday, fans saw a very tipsy Jonja “attending a swanky Hamptons party.” But after tripling a few too many, she quickly fell from swank to skank, it seemed. She made some intimate innuendos to some of the guests and tossed back the vodka. At one stage, she yelled out, “I’m not impressed with your rich friends…I have more money in the bank than any of them!”

Well, fans know that she’s got pots of money. And, sometimes she can afford to do some really eccentric things. The RHONY star entertains sometimes through rather bizarre behavior. E!News reminds fans od time viewers saw her during the premiere of season 9. There, she revealed she simply tosses her intimate toys in the dishwasher, along with her dinner dishes! And, then there’s the reminder that she “washes her thongs in her bidet.”

But right now, it seems Sonja just feels a bit sad and lonely. Do you understand that feeling? Sound off in the comments below.

Remember to check back with TV Shows Ace for more updates about Sonja Morgan on Bravo’s RHOBH.