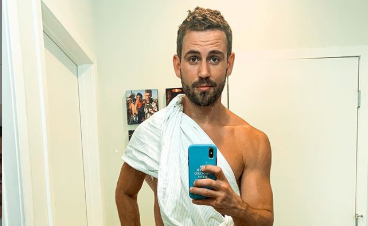 Nick Viall has never been one to keep his opinions secret. That was true in an interview he did recently where he confessed several juicy tidbits including the best kisser from his season of The Bachelor. Some Bachelors are happy to kiss and tell while some keep it close to the chest. Who could forget Peter telling Sydney she kissed the best before sending her home?

He is a gentleman though. He said some of the contestants had bad breath he didn’t name the worst kisser. When asked his choice for best kisser Nick said, “I’m just gonna say Vanessa Grimaldi, mostly because she always used Orbit gum before we kissed.”

Nick Viall Told A Lot On The Interview

Nick Viall complimented her gum choice then added, “especially right after she threw up, which is important.” About those with bad breath he said, “there’s nothing worse than kissing someone with bad breath, I don’t care what you look like.”

In a bit of self-deprecation, Viall called himself, “a poor man’s Peter Weber.” Viall traveled down memory lane about things people compared him to. He said, “I was once told I was the Walmart version of Ryan Reynolds, which I honestly felt was a compliment.”

He’s Not A Fan Of Reality Television

Despite being the Bachelor, Nick Viall said he’s not a huge reality fan. He likes pop culture and is friends with a lot of celebrities according to US Weekly. He often has them on his podcast The Viall Files. After friend Rachel Bilson appeared on his show the two sparked romance rumors for a bit. On Instagram Nick has been making clone videos while self-quarantining. The videos are him with his other selves in isolation.

He recently made one telling fans what to wear on a Zoom quarantine date according to WKYC.  Another video showed one of his clones had given themselves a haircut. In a previous interview, the reality star threw a bit of shade at Tyler Cameron and Hannah Brown’s Tik Tok streak. He said, “stay at home. Stop doing Tik Tok videos by the pool with a group of people.”

It takes a team to process a new haircut…

Nick Viall didn’t name the two Bachelor nation stars, but it seemed obvious he was speaking about them. Instagram videos with one person though, he’s all for that. At least he’s finding ways to entertain his followers from home. The fans continue to tune in to his videos and podcast.

‘Bringing Up Bates’ Season 11 Fate Revealed: Renewed Or Canceled?
Jill Dillard Praised For Giving Her Kids A Better Life
‘Vikings: Valhalla’: Netflix’s Plans For Large Episode Order Revealed
Amy King Releases Bizarre Photo Amid Not Wanting To Be In The News
Kaitlyn Bristowe Reveals What It Was Like Working With Michelle Young