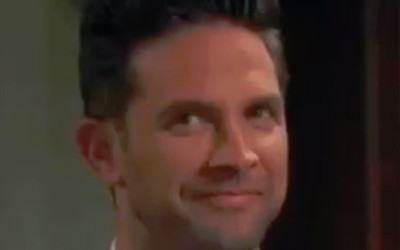 Eagled-eyed Days of Our Lives viewers saw a familiar face in the daytime soaps Spring Preview: Stefan O. DiMera. Fans last saw Stefan in October of 2019 when he was shot by Lani (Sal Stowers.) His heart was used to save Julie (Susan Seaforth Hayes,) so it will be interesting to see how DOOL explains Stefan’s return.

When the character of Stefan showed up in Salem, soap vet Tyler Christopher was in the role. As fans likely know, Tyler played Nikolas Cassadine on General Hospital off and on between 1996 and 2016.

TV Shows Ace reported last year that the role of Nikolas was secretly recast with a new actor. Tyler began airing on DOOL in 2017. He abruptly quit the soap in 2018 after taking a leave of absence that eventually became permanent.

His GH co-star, Brandon Barash, took over the role. Fans were unsure at first but he quickly won them over, particularly once Stefan was paired with Gabi (Camila Banus.)

“Stabi,” as fans call them, quickly became one of the DOOL’s hottest couples. Alas, Brandon was let go in 2019. Speculation soon followed that his exit wasn’t permanent. However, it has been pure speculation until now.

Michael Fairman reports that Brandon confirmed his return to Days of Our Lives via Instagram on April 15. The actor/singer performed a “little ditty” he wrote about “coming back to Salem (city.)”

He encouraged fans to tune in on April 23 to see his return to the iconic daytime soap.

The fans have spoken in the committee, life without Stefan has been quite sh**ty, so I made this little ditty, I’m coming back to Salem (city), if you miss this, it’s a pity, April 23rd on your TV(itty). For the full version of this video/announcement, download the #DOOLapp #dool #stabi

Rumors are that Louise Sorel is also heading back to DOOL as Vivian Alamain, Stefan’s mother. Could she be tied to Stefan’s return?

What Has Gabi Been Up to on DOOL?

The truth is Gabi hasn’t had much to do without Stefan. Sure, she had a short romance with Eli (Lamon Archey.) The relationship imploded at the couple’s wedding when he found out about her revenge plot against Lani. (Gabi blackmailed Lani into leaving Eli at the altar.)

In the spring preview, however, Gabi sees Stefan’s reflection in the storefront window. Is it real or just her imagination? Stefan may be dead, but is he dead-dead or soap-dead?

Earlier this week, NBCUniversal revealed new details about the upcoming streaming service, Peacock. According to the DOOL Twitter account, the daytime drama will be available on the streaming service.

Oh, the stories Salem could tell. Stream #DAYS on @PeacockTV this July. https://t.co/ht53KXbF3J

It’s unclear, however, if it’s just new episodes or a treasure trove of classic episodes as well. Cnet writes that a “big vault” of NBC shows, including Law & Order and The Office will be on the Peacock service. Reboots of 80s hits Punky Brewster and Saved by the Bell are also slated for this year.

Good news for Hulu users. NBC’s content will continue to be available on both Hulu and the new NBC streaming service, at least for the next few years. The streaming service will have some content available for free. All content is available for $5, with ads. An ad-free subscription will be $10. Peacock launches on July 15, 2020, for everyone. Comcast users will get an earlier sneak peek.

How Is Josie Bates & Kelton Balka’s Baby Hazel Doing In The NICU?
’90 Day Fiance’: Clues Jenny Slatten & Sumit Are Married Now
Ali Fedotowsky Relieved To Get Answers To Mystery Illness
‘LPBW’ Will Zach & Tori Move To Roloff Farms For Jackson And Lilah?
Duggar Kids Preparing For End Of ‘Counting On?’ Looks That Way