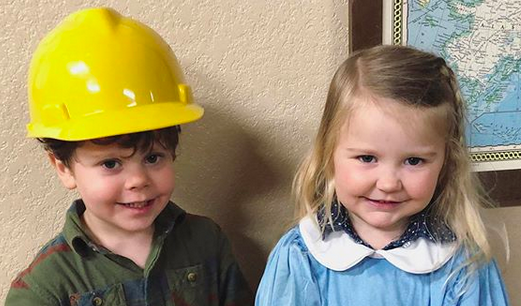 Anna featured her daughter Meredith Grace Duggar on her Instagram Stories just a few hours ago. Those looking for something cute to watch should head over to her Instagram Stories before the video expires in approximately 20 hours. The video features Meredith Grace Duggar looking absolutely adorable as she shows off a little of her personality while telling a joke to Instagram.

Meredith Grace Duggar looked positively precious as she shared her humor with her mom’s followers.

While Anna Duggar and her six children are likely doing their part to stay home and practice social distancing… Meredith Grace Duggar was certainly dressed to impressed this morning. She sported a heavenly looking floral dress with various shades of pink, purple, and green on the flowers. The cute dress featured long, white sleeves.

Meredith Grace Duggar’s hair was parted off to the side as it flowed down her body. There was also a large bow tucked into the side of her hair pushing some of it back out of her face.

In the video, Meredith Grace Duggar had her hands clasped together in front of her as she recited the joke. She placed one finger over the side of her mouth with her other hand holding her wrist. Her eyes widened as she posed with an adorable “deep in thought” look on her face. In the moment, she was giving her followers time to process the question.

Then, a bright smile slowly painted its way across her face. She revealed the answer to her joke. Clearly tickled and proud of herself.

Unfortunately for Counting On followers hoping for more… It wasn’t a very long clip. Meredith only told a single joke. Meredith, however, made so many adorable facial expresses and poses that it was easy to watch the clip several times.

She will be celebrating her 5th birthday soon.

It was nearly a year ago that we reported on Meredith Grace Duggar’s fourth birthday celebration. As hard as it is to believe, she’ll be turning five soon! Counting On fans hope things will return to normal in the world soon so Meredith can have a traditional birthday party surrounded by her massive family. The Duggars, however, have already previously shown they are more than willing to practice social distancing while celebrating birthdays.

Happy 4th birthday, Meredith!! 🎀 You are as sweet as your ice cream cake! ☺️💕🍦 We love you!! @annaduggar I think we could write a book filled just with all the hilarious/cute things she says every day! ☺️💝 #littleduggars

Meredith Grace Duggar is one of six children belonging to Anna and her husband Josh Duggar. Meredith recently welcomed her baby sister Maryella Hope Duggar into the world in November of last year. Some fans have already started to speculate of Anna and Josh Duggar will be having any additional children.