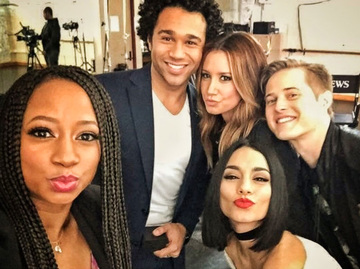 A High School Musical reunion? Sign us up. Here’s what we know so far.

We’re all in this together, right?

Deadline broke the news on Monday that the stars of High School Musical will reunite on Thursday, April 16, for the Disney Family Singalong. Director Kenny Ortega managed to “wrangle” up the cast members, including Zac Efron, to participate.

Yes, this means fans will see the likes of Vanessa Hudgens, Ashley Tisdale, Corbin Bleu, Monique Coleman, and Lucas Grabeel in the same place at the same time! In fact, the Disney icons will perform “We’re All in This Together.” There’s no word yet on if Efron will take part in the number.

Ortega told Deadline, “We couldn’t reach Zac until late but when we did, he immediately jumped in, of course. Everyone we reached out to was quick — and you’ll see it in their spirit and the way they come together from their homes.”

The rendition will be powerful because the song’s message is something the world needs to hear during this time. There’s no doubt that Disney will unite people with their words of encouragement.

Will the cast of High School Musical: The Series participate?

It would be a huge missed opportunity if the current cast of High School Musical: The Musical: The Series (HSMTMTS) was left out of this singalong, right? Luckily, Ortega revealed that they will have a presence. We will also see appearances from the cast members of Cheetah Girls and The Descendants.

Before the pandemic, the cast and crew of HSMTMTS started working on Season 2. The Disney Plus original series was scheduled to return later this year. A new premiere date has not been set. Nevertheless, the singalong will definitely be a fun surprise to hold fans over until Season 2 premieres.

So, you’re saying there’s a chance? After all, the stars of the films and the series will be at the “same place” at the same time come Thursday. Fans are already wondering if there’s a chance for a crossover performance. Perhaps Ortega and Disney can take the meaning of “We’re All in This Together” to the next level.

If the worlds do collide, it will be the second time that Lucas Grabeel has worked with the High School Musical youngsters. The man behind Ryan Evans made a cameo in Episode 8 for an original performance.

What else to expect?

Be sure to tune in to Disney Family Singalong this Thursday, April 16, on ABC at 8pm ET to witness the High School Musical cast perform “We’re All in This Together.”