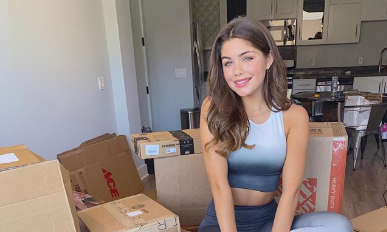 Hannah Ann Sluss is making the rounds virtually with press after her failed engagement to Peter Weber from The Bachelor. There was a lot going on with Peter when it came to not only her engagement but the other Hannah in his life. Hannah Ann revealed after their engagement Peter reached out to Hannah Brown for some closure.

The ending didn’t surprise many fans, because it became obvious Peter felt conflicted when Madison Prewett left. Still, Hannah continues to think over what went right and wrong in her season. In an interview for Ben Higgins and Ashley Iaconetti’s podcast, Almost Famous, she talked a bit about what producers did wrong in her opinion.

Enneagram Type 3 right here👋🏼 AKA “The Charmer” 😉 Is anyone else into learning about their enneagram type? It’s such a great way to learn about your basic desires, fears, and key motivations!

Everyone remembers champagne gate when Hannah Ann Sluss accidentally opened champagne Kelsey Weier had saved for that moment. Hannah told the podcast she felt like producers left out some vital moments at the beginning according to The Cheat Sheet.

Ben Higgins mentioned while Madison’s faith made center stage in her story, Hannah Ann’s faith didn’t get highlighted on the show. Hannah agreed and said, “I think, watching back the show, you only see, like, blippets of me. And I think that was probably the most frustrating part is that there wasn’t a lot of getting to know me. To know more of my character and my intent and why I was there.” Hannah went on to say she talked to Peter about her faith and looking for a spiritual connection.

Hannah Ann Sluss said the reason she and Madison got along was because they both had such strong faith in God. When Iaconetti said producers wanted viewers on Madison’s side, Hannah agreed. She said, “when I was watching the first couple episodes, I was like, ‘Oh my gosh,’ … it definitely was disheartening, ’cause I knew I was going to be given the wrong impression of me.”

The serious conversations they had weren’t aired, according to Hannah. It makes sense because they only have so much time to show all the girls. Of course, producers don’t want to miss out on any drama. Producers got into Peter’s head according to Kelley Flanagan, another contestant. She came out with a statement they wouldn’t let her see him. She said she could tell he treated her completely differently after they talked to him. Fans will continue to follow the newest members of Bachelor nation on social media and their press tours during quarantine. They are all hoping love is in their very near future.