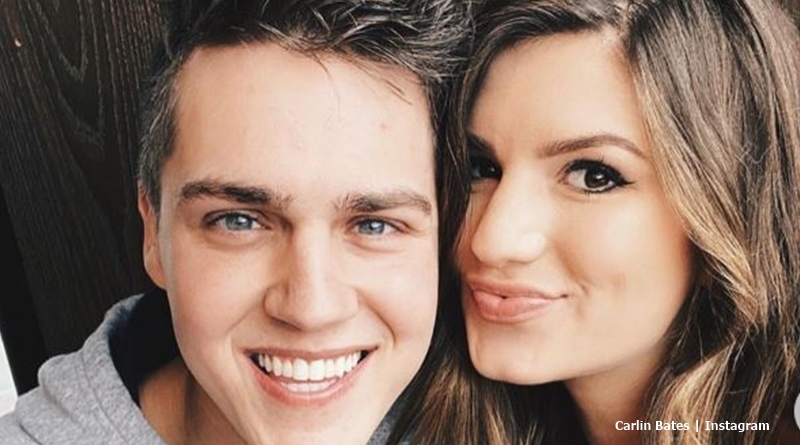 Carlin Bates’ fans heard from her that she once dated another guy before Evan Stewart. And now, the reveal came that he nearly hooked up with another Bates girl. Certainly, it looks like they nearly missed their opportunity as a married couple. Things would have been very different for the family of three if either scenario turned out differently.

Carlin Bates and Evan Stewart talk about their early relationship

TV Shows Ace reported that Carlin once dated someone else. The news emerged during a video they posted up on their YouTube Channel. Some people think she might have dated a Duggar boy. Potentially Joe Duggar got thrown around as he attended bible college in the area and hung out with the Bates family a lot. Whoever that person was, apparently broke it off with her, which blew away Carlin’s fans. Meanwhile, others think if Joe Duggar featured in her life, she dodged a train wreck.

Now, it turns out that Evan Stewart nearly hooked up with one of the other Bate’s girls. Frustratingly, they never mentioned which one it could be. When Carlin Bates said she previously dated, Cheatsheet went off in search of the possibility that Joe Duggar walked away from her. Now, the outlet’s writers put on their thinking caps and decided on two potential Bates girls who maybe caught Evan’s eye in years gone by.

Happy Easter from our family to yours! ☀️

The Bates girl that Evan nearly hooked up with might not have sprung from his own heart. ShowBiz Cheatsheet notes that “someone tried to set Evan up with a different Bates girl.” Maybe his parents pushed him that way. Or, it could be that the Bates family liked him for one of the other eligible girls. The outlet came up with two names. First, they pinpointed Tori Bates. As Tori dated Bobby Smith in 2016 and they formally started courting in 2017, Evan probably featured as a potential mate before that. The two young people were close to each other in terms of age. Plus, both of them back in 2015 wouldn’t have been too young to start thinking about a serious relationship.

Carlin Bates’ husband Evan Stewart might have appealed to the family as a mate for Josie. The two young people hold an age difference of four years. So, if she turned 17, then he hit 21: Not a bad age for partnering up in the Bates’ circles. Notably, Josie and Carlin only have just over a year separating them in age. Plus, Josie actually married Kelton Balka, four years older than her.  Neither of them turned up as Evan’s wife, which seems preordained in a way. After all, he and Carlin seem blissfully married now.

Happy Resurrection Sunday! This Easter has looked different for us, We would usually be at church surrounded by fellow believers worshiping together, but we spent the morning gathered as a family live-streaming in our little home. Although our circumstances are different I know one thing is for sure, Jesus is Alive and He is so much bigger than any problems we are facing today. So grateful that we serve a Risen Savior who interceded on our behalf so we can have eternal life. Hope you are having a wonderful Easter 🤍

What do you think about Evan Stewart potentially marrying one of the other Bates’ girls? Sound off your thoughts in the comments below.

Remember to check back with TV Shows Ace often for more news about Carlin Bates, Evan Stewart, and the rest of the cast from UPtv’s Bringing Up Bates.