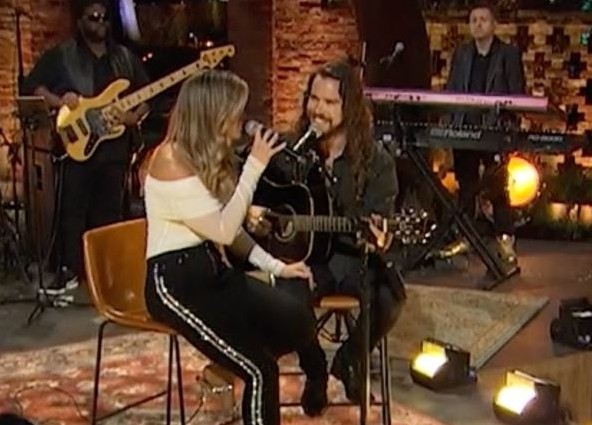 Get ready Bachelor Nation. The newest show in the franchise premieres tonight, April 13 on ABC. There have been many fans who’ve been skeptical of the new series, but host Chris Harrison assures them there will be a Bachelor feel to it. The Bachelor: Listen to Your Heart will feature 20 contestants who are wanting to further their music careers while finding love. Reality Steve has already shared spoilers for the big finale of the show. Now, he is also sharing post filming spoilers about couples. Keep reading to find out more, but be warned, spoilers ahead!

Reality Steve shares spoilers about Listen to Your Heart

Reality Steve has said he isn’t going to give episode spoilers for this new season. However, he does have information on the ending. Actually, Steve even has a huge spoiler for something that has occurred post filming. According to Steve, two couples will form and stay together at the finale. The couples are Trevor and Jamie and Chris and Bri.

With the couples being announced, Steve sent out a tweet this afternoon about the status of one relationship. In his tweet Steve said, “One thing to add to the #ListenToYourHeart finale spoiler: Trevor already broke up with Jamie. For anyone that knows anything about Trevor’s past, this isn’t the least bit surprising.” Wow, that was definitely a short lived relationship. However, not as short as Peter Weber and Madison Prewett’s.

Just a note, Steve had predicted this breakup when he first announced Trevor and Jamie were a couple. He knew because of Trevor’s past, they would not stay together. More to come on that when more information surfaces.

A post shared by Listen to Your Heart (@listentoyourheartabc)

There are also other finale spoilers to share. According to Steve, the final two couples were judged by Kaitlyn Bristowe, Jason Tartick, Taye Diggs, Jewel and Rita Wilson. The finale was filmed in Nashville, Tennessee at the Country Music Hall of Fame. Ultimately, Chris and Bri were crowned the winners of Listen to Your Heart. Steve said, “They won the opportunity to write and record some original music and make at least one music video. They will also be going on tour once the finale airs.”

Also, Chris and Bri told each other they were in love before their final performance. They were reportedly the first couple to express those three little words. No word yet on how they are doing post show.

Don’t miss the premiere of The Bachelor: Listen to Your Heart tonight on ABC.