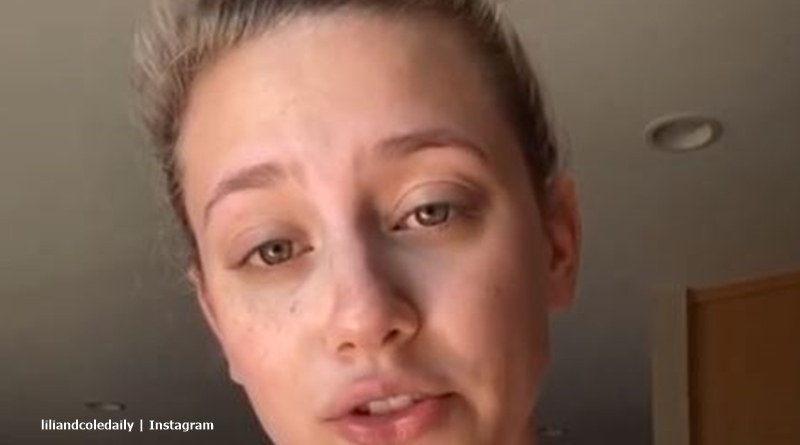 Riverdale star, Lili  Reinhart who plays the role of Betty Cooper on The CW teen drama series, shared about her doggie’s traumatic clash with a huge dog on Friday. At least ten times bigger than Milo, Lili really thought little Milo saw his last day on Earth. Distraught, she took to Instagram to tell her fans about it. But thankfully, it looks like Milo’s on the mend after surgery.

Lili wept as she spoke to her fans on her Instagram about the horrifying encounter she and her little dog Milo went through. She really thought that Milo would die. The little dog literally got attacked and munched on a bigger dog on Friday. Lili, beside herself, couldn’t seem to stop the attack. At one stage, his little head was completely “inside” the other dog’s mouth. Lile described it incident as totally “terrifying” as she felt so helpless.

But somehow, almost inexplicably, as she screamed and yelled, the big dog let Milo go. Poor Milo was really in a bad way and the Riverdale star saw her furry friend taken off for surgery. Fans poured out a lot of loving support when they heard the news on Instagram. Obviously shocked and very upset, she laid her heart bare over the horrible incident. But, she returned later and told fans her baby dog made it out of surgery. In her update, she described him as “a little timid,’ adding that “He’s on pain meds to help because you can tell he’s quite uncomfortable with the stitches.”

In her followups on Instagram, Lili worries that Milo might now be afraid of big dogs. In fact, it traumatized her so much she experiences “flashbacks.” But it seems she’s already decided she needs to help her pup through any trauma. She took him home after his surgery and immediately lay on the couch and cuddled the poor little fellow. Lili said, “He’s doing surprisingly well and is being a little extra cuddly right now which is really sweet.”

The Riverdale star specially thanked her loyal supporters who reached out to her about Milo. And, she also told them that she’s “watching his every move and taking good care of him.” Daily Mail UK reported that “Reinhart adopted Milo back in February and introduced him to the world via Instagram.” So, the little rescue dog hasn’t been in her life all that long. Nevertheless, it’s clear they grow very close. Luckily, a happy ending looks likely, and fans still hold both of them in their thoughts.

What do you think about this huge dog attacking the Riverdale star’s tiny furbaby? Did you ever experience anything this terrifying? Sound off your thoughts in the comments below.

Remember to check back with TV Shows Ace often for more news about the cast of Riverdale.