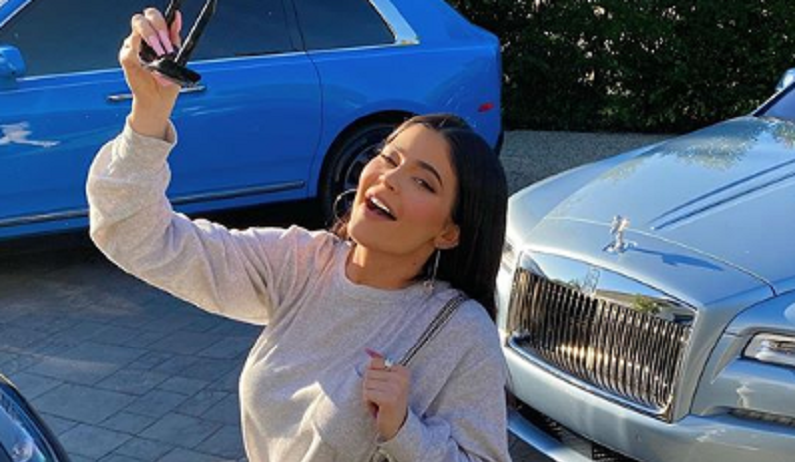 Kylie Jenner has been practicing social distancing like most of us. But it turns out that she broke this small rule. She allowed family and ex-boyfriend, Travis Scott, over to her house. This comes after Kylie had a lonely night in. She took to Instagram to post sultry clips of herself drinking wine while admitting that she couldn’t sleep.

It could be that Kylie had Travis Scott on her mind. He traveled to Palm Springs, California to spend time with Kylie and their daughter, Stormi, amid the coronavirus pandemic.

According to Us Weekly, Kylie Jenner posted on her Instagram Story on Saturday, April 11 of her family making pizza at an outdoor oven by their swimming pool.

“What’s that gonna do?” the beauty mogul asks her momager to which Kris responds, “I don’t know.”

“I think I should leave it alone,” Kris adds before Scott asks, “Is it hot?”

Travis Scott posted his own video to his Instagram Story. He shared a clip of him and Stormi dancing by the pool.

“Is this your bop?” he asks his adorable daughter as they dance to Daft Punk’s “One More Time” from the Troll Worlds Tour. Their 2-year-old daughter danced around in a white one-piece bathing suit. Focused on the beat of the music, Stormi didn’t respond and continued to twirl around and around.

Rumors swirled that Kylie Jenner and Travis Scott got back together five months after their split in October 2019. However, Kourtney Kardashian’s son, Mason Disick, slammed the rumors that the couple was more than friends. He confirmed that the two are not back together on his Instagram Live video, which has been taken down.

It’s also unclear whether Kylie and Travis are self-isolating together amid the ongoing COVID-19 pandemic.

Kylie Jenner couldn’t sleep and had a glass of wine

On Friday night, Kylie took to Instagram to post a series of steamy clips. She showed off her seductive side while revealing to followers that she couldn’t sleep. In the videos, Kylie wore a white crop top and gray sweatpants as she enjoyed a glass of white wine. Kylie wore her hair in a bun and accessorized with a pair of earrings.

Kylie’s quarantine time has been spent sharing some of the aspects of her life. As per HollywoodLife.com, she revealed that she’s been spoiling her daughter more while in isolation.

“I have bought her every single outdoor toy you could imagine,” the self-proclaimed billionaire said during an Instagram Live chat with her BFF Stassie Karanikolaou. “She has bouncy houses out there, water toys. She’s been outside every day, just living her best life – I’m trying to keep her entertained.”

Kylie also revealed that her beauty routine has changed since being in quarantine. For one, she’s embraced her natural hair. She also ditched her typical manicure for a simple nude manicure. Since she can’t get to a salon, Kylie has been doing her own nails.

What are your thoughts on this latest sighting between Kylie Jenner and Travis Scott? Do you think that the couple is back together? Sound off below in the comments section.

Tori Spelling And Dean McDermott Divorce Rumors, Dean Has Excuses For Everything
Duggar Kids Throw Shade At Michelle On Her 55th Birthday
Kylie Jenner Showed Up NAKED To NYFW, But Is A No-Show At Met Gala
‘GH’ Spoilers: Sonny Is Back And Furious, Limo Explodes Shakes Up PC
Duggar Fans Appalled By Jason’s Response To Natural Disaster