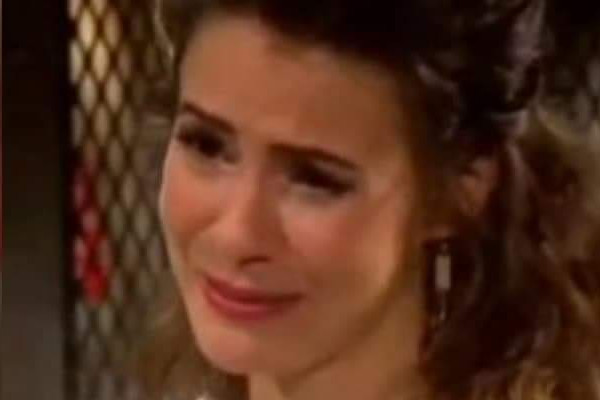 Days of Our Lives continues to entertain fans while they are at home during the coronavirus pandemic. Soap ratings have increased tenfold due to people looking for mindless entertainment. The baby switch fallout continues this week on DOOL.

A devastated Sarah (Linsey Godfrey) is still reeling from finding out baby Mackenzie isn’t hers. She was set to marry Xander (Paul Telfer) on DOOL when Eric (Greg Vaughan) and Nicole (Arianne Zucker) broke the news.

Instead of calling off the wedding, Sarah read Xander the riot act at the altar. She goes to say her goodbyes before the baby is given to Brady (Eric Martsolf) and Kristen (Stacy Haiduk)

However, when Eric goes to comfort his ex later, he finds her missing.  Baby Mickey is missing, too. The spring preview showed Rex (Kyle Lowder) back in town. Does Sarah hide out with the baby at Rex’s?

Kayla Chooses Between Steve and Justin

After removing the chip that turned him into Stefano, Steve (Stephen Nichols) briefly suffers from amnesia. He regains his memory this week on DOOL and wants Kayla (Mary Beth Evans) back. However, she is with Justin (Wally Kurth) now and she gives Steve the news.

While Kayla is torn between two loves, Justin and Steve both vow to win her back. TV Shows Ace has more on this love triangle that is dividing fans. Tell us in the comments if you’re TeamSteve or TeamJustin.

Spoilers indicate that General Hospital alum Kelly Thiebaud (Britt) will appear on DOOL this week as Zoey, Evan’s lawyer. The news she brings will shock Rafe.

Now that Princess Gina is gone, Hope (Kristen Alfonso) struggles with the bad things she did. As Princess Gina, she pushed beloved cousin Jennifer (Melissa Reeves) off a balcony, causing a year-long coma.

If there’s anyone who understands what Hope is going through, it’s Steve. The two seem to bond over their respective situations. Could a Hope/Steve pairing be in the future on DOOL?

Like many shows right now, The Tonight Show Starring Jimmy Fallon is filming from home with guests appearing on video calls. The late-night staple recently aired an epic skit with fellow SNL alum Kristen Wiig and Will Ferrell.

TV Shows Ace reports that the hilarious sketch combined every soap cliché imaginable. Not even Kristen could hold her laughter.