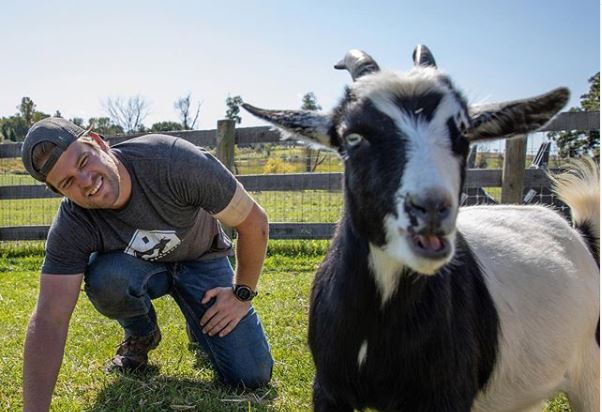 Tonight it is time for the big premiere of Saved By the Barn on Animal Planet. This show is all about Dan McKernan and his big change. He left his six-figure job behind so that he could open an animal sanctuary. After spending six months filming, the first season is finally here. This show has 12 episodes so far. It is all about Barn Sanctuary.

What is Saved By the Barn?

McKernan, his father and his twin brother, Chris are all in Michigan running an animal sanctuary. This is a lot different than what you have seen on Tiger King.

Dan was living in Texas and he was working in the tech field. He had moved around a lot and decided it was time for something new. Dan McKernan admits he was sitting at the computer way too much and not around people or animals near enough. He read the book Living the Farm Sanctuary Life: The Ultimate Guide to Eating Mindfully, Living Longer and Feeling Better Everyday and the rest is history!

Dan’s parents were receiving offers to sell their farm but didn’t want to do that. Starting this animal sanctuary was the best bet for them. Dan moved there in 2017 to work full-time, but the reality show is just now coming out. He is single and admits that dating is hard with as much time as he spends with the animals. The women will probably be knocking down his door after seeing him on Saved By the Barn. He also lives as a vegan.

Dan did tell the New York Post that he has one regret. He said, “It’s cliché, I know, but not starting the sanctuary sooner is my biggest regret. It took me a while to find my calling, which I’m beyond fortunate to have found, but I often wonder had I found it sooner, how many more animals we could have saved.”

Can’t wait for the world to meet Ginger tomorrow on @animalplanet! Tune in at 10pm est to watch #SavedByTheBarn!

What animals do they have?

They simply started with two cows at Saved By the Barn. Dan doesn’t like the idea of animals being alone and he likes them to have a buddy. Now, they take care of over 100 animals and they all vary based on how they got them or what happened to them. You will get to meet them on Saved By the Barn tonight on Animal Planet.

Make sure you don’t miss new episodes of Saved By the Barn on Saturday nights on Animal Planet. There will be new episodes each week, so this is the perfect show to get started on now while you are stuck at home.