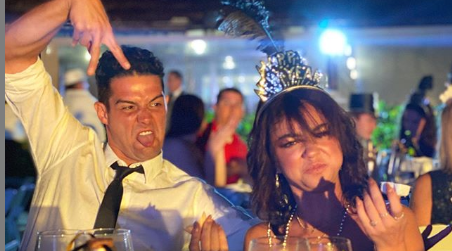 Wells Adams and Sarah Hyland have been dating for awhile now. The BIP star and Modern Family actress started talking in DMs and then texting and various other forms of technology until they finally met in person.

The two don’t have a date locked down for their upcoming wedding, yet. Sarah revealed he asked permission from her parents before asking the big question. He also asked her TV parents. He tracked down Julie Bowen and Ty Burrell for their blessing.

Out of toilet paper.

Wells Adams doesn’t plan on allowing cameras to be there for the big day. He said in an interview, “I think they know I would never do that.” When asked about a date Wells said, “Sarah is going to be, like, Pinterest boards and vision boards and a lot of Elmer’s glue is going to be involved. So I think we’re just holding off on that.”

He has one thing that makes him really mad about Sarah and it caused him to file for divorce before the wedding even gets going. Wells said he finished a puzzle in the morning and then he lost his mind. He told her to go look at the puzzle when she walked out of the bathroom. Wells said she, “came back and had like this sh*t-eating grin on her face and she had stolen the last piece. ” This is a deal breaker who jokingly said he filed for divorce.

Wells Adams and Sarah may not have set the date yet, but they are definitely making plans. She posted a picture of those who would be in her wedding. It includes Asley Newbrough, Ciara Robinson, and Vanessa Hudgens. Also present are her friends who aren’t famous. She captioned a picture of all of them, “bride tribe.” She also posted a picture of herself working out to Instagram with a caption including, “wedding body ready.” That could mean the wedding is happening this year.

Chris Harrison is going to be a guest at the wedding for sure. According to Cosmo, he offered to officiate, but Wells told him no. He said, “I want him to just have fun and have a good time and not have to be burned by any of that stuff. He’s my friend. I don’t want him to have to work at my wedding.” Fans look forward to knowing more about the venue, the dress, and everything else. Hopefully they’ll open up about those things soon.