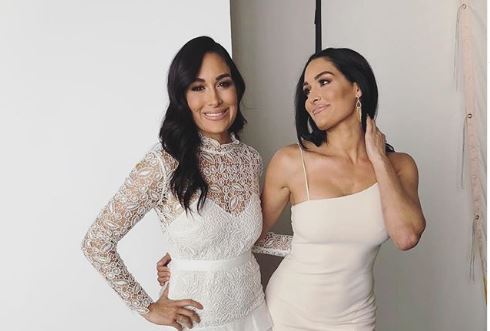 This week on a new episode of Total Bellas Brie and Nikki Bella met with their dad for dinner. Nikki’s boyfriend Artem went along. They didn’t talk to him about their new book, but that is coming up on an upcoming episode. Now, People is sharing that the girl’s dad is not happy about the book.

It turns out that Nikki and Brie’s dad doesn’t love the idea of a book. They showed that he will be allowed to read over it and they may changes things in the book based on his feelings.

When Brie and Nikki Bella tell their dad they are writing the book, he speaks out.

“We all have a past. But we’re living for today and for the future, and I’m not that man 18 years ago. I’m a whole different man today. I mean, this is who I am now. Let’s talk about me now.”

The focus of the book is their life story, which includes how they grew up. Brie is actually disappointed that her dad didn’t love the idea. It may be hard to get him to agree to what they want to put out there. This should play out on the rest of the season of Total Divas because the previews show the girls meeeting with him again next week.

23 weeks today! We are definitely on cloud 9 knowing we are getting closer and closer to meeting our baby. ❤️ @theartemc

It turns out that Nikki Bella gave her ex John Cena “editing rights” for the book. John is a big part of Nikki’s past, which also means he is a big part of the book. Nikki talked to ET’s Lauren Zima and shared what rights John has for this book.

“Because of contracts I signed, he had editing rights. So he’s read his chapter. He edited it. Anything that I do with him has to go through approval through him.”

Nikki shared a bit more about what the book will be about when it comes to John.

“What we’ve realized from being in the spotlight now for 13 years and being reality stars for seven, is that people like to know they’re not alone when they go through certain situations. I think that really opened up in my eyes through my breakup. It was so hard to showcase that and live through it, but I can’t tell you how many women and men constantly come up to me like, ‘Thank you for showcasing that, because you helped me get through what I went through.”

New episodes of Total Divas air on Thursday nights on E!. You do not want to miss this season.