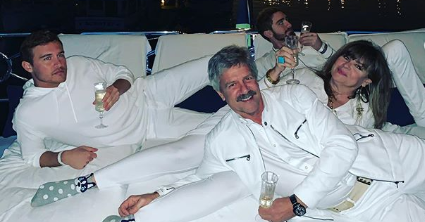 Everyone knows Peter Weber and Kelley Flanagan are quarantining together. They’re in Chicago and he’s not really hidden it in interviews. He was recently asked on the Almost Famous podcast if he would move to Chicago. When questioned if he would move to Chicago, he said, “honestly, I’ve always thought New York or LA,” Weber said. “I don’t know, who knows? Chicago’s kind of similar to New York. So we’ll see.” The king of indecision probably truly has no clue what he’s going to do.

Peter said once they reconnected he supported her through a family issue and flew out to her house. He said that’s when the stay at home order happened. It seems very similar to Hannah Brown helping Tyler Cameron through a family thing and then ending up quarantining together. Kelley has been very open with the way she felt the producers manipulated Peter and got into his head.

Why Did Peter Weber Stay In Chicago?

Peter said, “on top of that, I realized it’s kind of smart to do because my parents are still in their 60s. I still live at home … obviously, I have to fly still. I’m an essential worker. So I didn’t want to risk bringing something home to them. So this was the place to be.”

He said they aren’t dating, but she’s been there for him. He’s been through a lot and he thinks it could happen in the future. According to The Cheat Sheet, at the moment, they are just enjoying spending time together and getting to know each other better.

Is this how you Tik Tok? If I’m even half the parent my mom has been to me, my kids will be the luckiest in the world. Spread love, I promise you’ll never regret it 🙏🏻

The whole world saw Peter Weber’s mom, Barb Weber, talk about her dislike for Madison Prewett, and a lot of Bachelor nation hated her for it. The memes spoke for themselves. Apparently, she likes Kelley. Peter told Nick Viall after the Instagram picture he posted with Kelley, that his mom did like the lawyer. After Nick Viall said he received messages from his picture with her saying, “you’re on Barb Weber’s list,” he asked Peter.

Weber said, “I don’t know if it’s the Chicago thing, Chicago ties. She’s from Chicago, not too far from where Kelley lives out here. So, yeah, definitely likes Kelley. Listen, we’ll see where it goes.” Barb also commented on Kelley’s Instagram post saying that was a wrap, “We need to do lunch and go shopping for the day.” No way she would go with Madison Prewett anywhere. Needless to say people have nothing to do in quarantine but analyze their relationship and will continue to do so for the foreseeable future.

‘Extreme Sisters’ Anna and Lucy DeCinque Engaged To Their ‘Prince Charming’
‘Loki’ Reveals MASSIVE Flaw In ‘Avengers: Endgame’
TLC Makes A Decision – ‘MBFFL’ Renewed Or Canceled?
‘Days Of Our Lives’ Week Of June 14 Spoilers: EJ Pleads His Case – Jake Caters To Kate
What Exactly Does Jovi Dufren From ’90 Day Fiance’ Do For A Living?