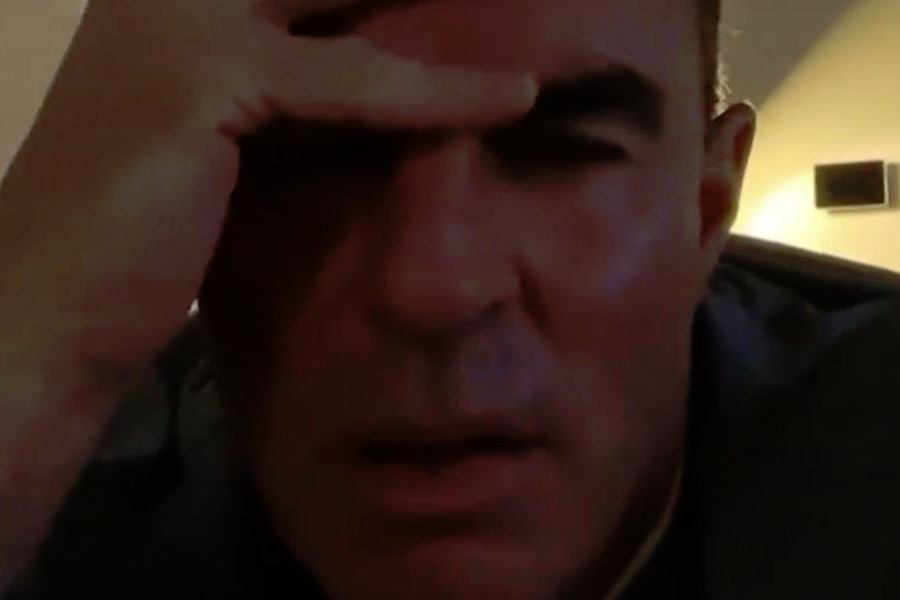 2020 is not going well for The Real Housewives of Orange County alum Jim Edmonds. It’s barely a week into April and he’s already had his share of troubles this month alone. He tested positive for coronavirus, as TV Shows Ace reports. His estranged wife seemingly shaded him on Instagram. Now he’s busted up his face in an accident at home.

Former RHOC star Jim Edmonds took to Instagram Wednesday night to share his injury with fans. It seems he had a run-in with a bathroom fixture in his home. More specifically, the shower door. It left him with a nasty cut above his eye, The Daily Dish reports.

In one photo, he shares a snap of his face. It shows a bloody cut above his eye. In the caption, Jim jokes that he got in a “fight” with a shower door.

In the second photo, he shares a close-up of the bloody gash. He reveals that the door was open when it was supposed to be closed. Jim says it was “dark” in the bathroom when the incident happened. We’ll spare you the gross close-up.

Another Instagram Stories photo seems to be taken after the cut has been cleaned up and taken care of. He captions the photo “Ouch.” Jim needed “12 more stitches” to add to his lifetime of baseball injuries.

Last weekend RHOC alum Meghan King Edmonds shared a TikTok video with her Instagram followers. In the video, she lip-syncs lyrics that blast an ex, TV Shows Ace wrote. The content of the video is actually a TikTok challenge that’s been going around for months.

After the TikTok video went viral, Jim’s representative slammed Meghan for the “pathetic and immature” video. Bravo TV reports that the rep accused the RHOC star of “spewing hatred and anger.”

Meghan is self-quarantining with the three young children she shares with Jim. While he is recovering from coronavirus in St. Louis, Meghan and the kids are in California. When she’s not caring for her children, Meghan posts TikTok videos to keep her followers entertained.

And her followers are loving it. One fan called Meghan the “tiktok queen” after she posted a video of her looking for her friends during isolation.

Quarantine has me looking for my friends like… 👀😅🤪 #quarantinecrazy #anyoneelse !?

Tell us in the comments if you think Meghan’s TikToks are funny or if she’s too old for the trend.

The Real Housewives of Orange County’s Season 15 is on hold amid the coronavirus pandemic. Check back with TV Shows Ace for updates on filming.