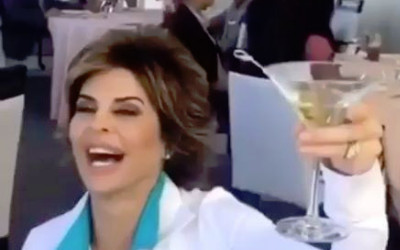 The Real Housewives of Beverly Hills star Lisa Rinna is excited for the Season 10 premiere. She is less than enthused about her tagline for the intro, however. After a fan provided a better tagline, Lisa petitioned Bravo to change hers for the upcoming season. So, what does Lisa want her tagline to be?

As TV Shows Ace reported, the taglines for the Season 10 intro are out, courtesy of Bravo. The network also released teasers leading up to the premiere. A few weeks ago, they released a trailer to whet fans’ appetites for the drama surrounding Denise Richards and Brandi Glanville.

The Wild Things actress is rumored to have had an affair with her RHOBH co-star. And, some of the other ladies play a role in the unfolding drama, particularly Lisa. In one clip, Lisa even asks Denise point-blank if she cheated on her husband with Brandi.

The taglines for each of the Real Housewives change each season, and fans often wonder if the stars get any input on the taglines. Now, Lisa’s petition reveals that Bravo is behind the creation of all of the various taglines. Lisa’s tagline for Season 10 is “The Secret to Life? Dance Like Everyone is Watching.” But, it sounds like she isn’t a fan of it, which is why she’s wanting it changed.

The RHOBH star loves to dance, so that’s where her tagline is from. “Drunk Lisa Rinna” makes at least one appearance per season, dancing on tables or any available surface. The former Days of Our Lives star also posts Instagram videos of sober Lisa dancing to popular songs.

The coronavirus social-distancing guidelines have given Lisa more time for dancing. She posts TikToks almost daily on her Instagram. TikTok is a trendy app that allows users to make short videos of themselves singing and dancing.

Many celebrities are filming TikTok videos with their children. Lisa is often accompanied in her dancing videos by daughters Delilah and Amelia. She finally convinced L.A. Law actor and husband Harry Hamlin to partake in the TikTok fad.

A fan sent Lisa Rinna a meme they created using one of Lisa’s Instagram photos. In Lisa’s photo, taken by her husband, she is opening the cork of a wine bottle with her teeth.

It’s come down to this. 🍇 Photo credit: Harry Hamlin #quarantinelife

The fan added the caption, “The secret to life? Drink like everyone is watching.” The Melrose Place actress posted the meme on her Instagram Stories and wrote that it is a “great” tagline. She reveals that she “hates” the tagline Bravo chose for her Season 10 intro.

In one post, she shares the tagline she wanted. “When people ask me what my sign is? I say dollar.”

The next post enlists her fans to get Bravo to change the tagline that she hates.

In the final Instagram Stories, Lisa creates a yes or no poll about whether she should change her “dumba**” tagline.

It’s unlikely Bravo would or could change Lisa’s tagline this late in the game. The Real Housewives of Beverly Hills premieres in less than a week.

Tell us in the comments what you think of Bravo’s tagline for Lisa versus the one a fan created for her.