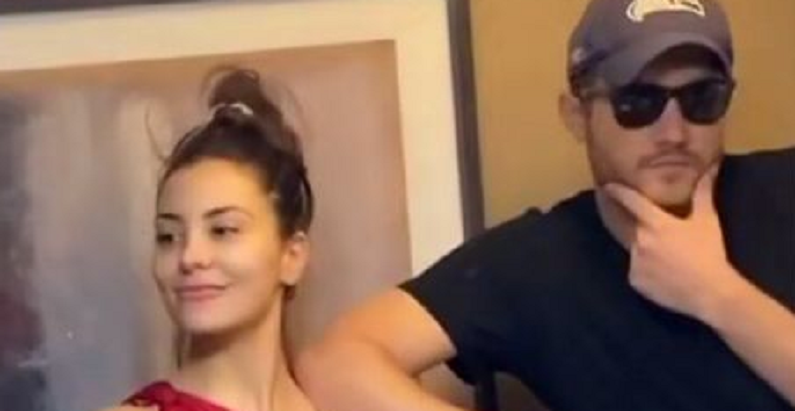 Peter Weber and Kelley Flanagan are in quarantine together. The couple were affectionate with each other last month. Kelley and Peter went out of self-isolation following social distancing rules  out and about in Chicago. Now, Peter has been staying at Kelley’s apartment in Chicago.

The pair are spending quality time together. Peter and Kelley made the romance rumors swirl again with their Cameo video. They looked just as cozy in the video as they did in their TikTok videos. Read on to learn more.

Bachelor alumni make use of their quarantine time together

The Bachelor’s Peter Weber and Kelley Flanagan are reportedly spending quality time together. The pair has been stuck together amid the coronavirus pandemic. The former Bachelor and contestant have been practicing social distancing in her Chicago apartment. On Wednesday, April 8, a fan got a surprise from the rumored couple, according to People.

“I heard there was a rumor or something that you guys thought I was like quarantined with a Chicago property tax lawyer, I’m not quite sure,” Peter joked in a Cameo video.

Kelley walked to the refrigerator and exclaimed, “What the hell is that? What? Where’d you come from?” She then faced the camera and gave a shout-out to the birthday girl, who also works as an attorney.

“Hey Lexi! Hey, I heard that you’re an attorney as well,” she said to the camera as she gave Peter a hug. “And it looks like great minds think alike. And to be honest I think both you and I should sue him for not choosing me!”

“Okay this just got weird,” Peter said. “What, no. I’m wishing her a happy birthday, don’t listen to her!”

“Happy birthday!” Kelley exclaimed. Peter ended the video by jokingly saying “lawyers” while shaking his head. Check out the cute video for yourself below.

Their appearance comes after Peter confirmed that he’s been staying at Kelley’s place during the coronavirus pandemic. The couple isn’t entirely alone though. Dustin Kendrick, another alum from Hannah Brown’s season of The Bachelorette, is also staying with them.

He confirmed that he’s now single in his post-Bachelor life. However, that doesn’t mean he’s not interested in dating Kelley, according to Page Six. Peter addressed those pesky dating rumors on Nick Viall’s The Viall Files podcast.

“Are we dating? No. Do I love spending time with her? Absolutely,” Peter said. “We’re not dating. Could I see that in the future? I’m always transparent, yeah, of course. I’d be extremely lucky and very happy if that happened.”

Peter wants to take things slow following his breakups from finalists Hannah Ann Sluss and Madison Prewett. He ended his Bachelor journey with a broken engagement. His reunion with Madison After the Final Rose led the couple to give their relationship another go. The pair split after two days of dating.

As for Kelley, she was eliminated during Week 7 of Peter’s season. The couple met before The Bachelor.

What are your thoughts on Peter Weber and Kelley Flanagan? Do you think they make a good couple? Sound off below in the comments section.