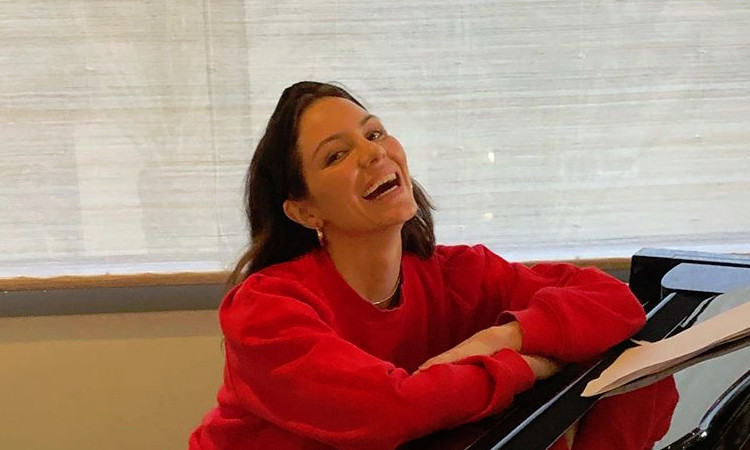 American Idol alum Katharine McPhee took a break from her nightly Instagram concerts to play dress up. The singer is currently in isolation with her husband, David Foster.

Katharine competed on Season 5 of American Idol. The show aired on Fox at the time. A reboot of the singing competition now airs on ABC. It is currently in its 3rd season.

Katharine went on to star in the TV show Smash. She also appeared in the musical Waitress in London’s West End.

In 2019, Katharine turned heads by marrying music icon David Foster, who is 35 years older than she is. David was previously married to The Real Housewives of Beverly Hills star Yolanda Hadid.

Coincidentally, Katharine wore the iconic yellow dress the week David appeared on American Idol. He served as her mentor for her performance of the Whitney Houston song, I Have Nothing, which David wrote.

In between Instagram performances, Katharine took her fans back to 2006 by donning the same yellow dress. In the caption she wrote, “It’s day 26 of quarantine and we’re breaking out dresses from 14 years ago.”

It’s day 26 of quarantine and we’re breaking out dresses from 14 years ago. Might have to resurrect this moment, on a red carpet, once we are out of this.

She also shared a throwback photo of her wearing the dress back in 2006.

Fans were stunned that it still fit. One fan commented that Katharine is aging like a “fine wine.”

A clip from YouTube shows her 2006 performance on American Idol.

Most of the country has been under stay-at-home orders for weeks now. Katharine and her husband, David, decided to help ease boredom by performing for fans on Instagram. As fans know, David is an iconic piano player who accompanies Kat on songs requested by fans.

The musical duo performed Mariah Carey’s Hero. They dedicated it to essential workers on the frontlines.

Been a lamb all my life, thanks for lifting our spirits in the toughest times – even 25+ years later, @MariahCarey. ❤️ pic.twitter.com/4ktDUn8VXK

Among other performances include a tribute to country icon Kenny Rogers and Somewhere Over The Rainbow. Katharine showing off her tap dancing skills to her amused husband. All of these videos and more are found on her YouTube channel.

Katharine and David were in the middle of a cross-country joint tour when the coronavirus crisis forced them to cancel it. They plan to reschedule the tour for a later date.

The actress-singer is also starring in a Netflix comedy with Eddie Cibrian called Country Comfort. Check back with TV Shows Ace for a release date.