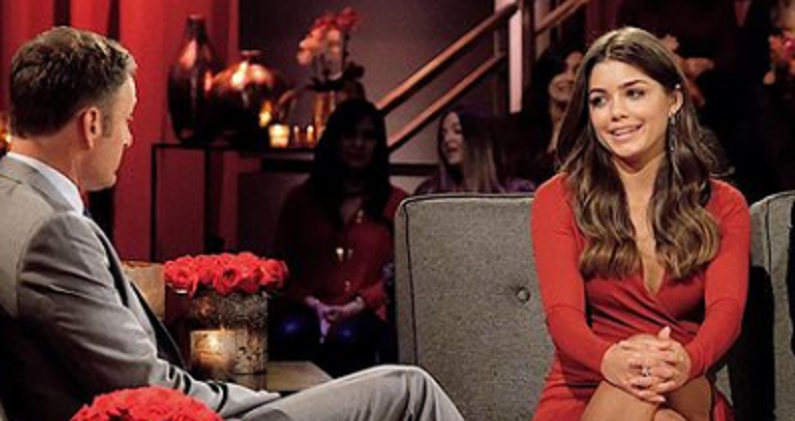 Hannah Ann Sluss just can’t seem to stop throwing shade at Peter Weber. It appears that she’s not quite over their split. The Bachelor Season 24 finalist is talking about his manhood.

The model ended her engagement to Peter Weber after he admitted to her that he still has feelings for Madison Prewett. Like most of us, Hannah Ann is at home and bored. So, she’s been making good use of her time. She’s been making fun of him at his expense and it doesn’t look like it’s slowing down anytime soon. But is she in quarantine alone?

The 23-year-old made an appearance on Kaitlyn Bristowe’s Off the Vine podcast on Thursday, April 9, as per Us Weekly. That’s where she threw major shade at ex-fiancé, Peter Weber’s manhood. She wanted to make a point as to how “bland” the commercial pilot comes off in real life.

“The vegetable that represents Peter’s manhood would be cauliflower because it has no taste,” Hannah Ann Sluss revealed during a game of plead the fifth. “Because cauliflower needs, like, a lot of flavor, it needs a lot. It’s just bland.”

Rain rain go away! 🌧 Shoutout to my backyard for letting me #stayhome with the sunshine ☀️

Hannah Ann Sluss and Peter Weber got engaged on the season finale of The Bachelor, which aired last month. Then he admitted that he still had feelings for Madison Prewett, who left during the final week after learning that he spent the night in the fantasy suite with Hannah Ann and second runner-up Victoria Fuller.

Hannah Ann admitted that she had a difficult time getting over their split when the series was still airing. She spent most of her time crying and “hurting” inside. Her friends tried their best to distract her, but it hasn’t worked. Hannah Ann says she feels that Peter “betrayed” her.

The Bachelor finalist has a new man in her life

It looks like she’s trying her best to move on. She’s back on the market and dating despite the coronavirus pandemic. She’s not letting this time stop her from getting to know other people.

During her interview, Hannah Ann Sluss teased that she’s been talking to a “mystery man,” as per People. She wouldn’t reveal the details, but she did confirm that he’s not from Bachelor Nation.

This comes after Hannah Ann spent time with Jacksonville Jaguars quarterback Josh Dobbs last month. She said she had a “FaceTime date” with the lucky guy, adding that it’s a “just a nice little quarantine fling.”

Trust Is A Must – Trusting can be really difficult but without it, connectivity and relationships suffer. For those who have freely trusted and been let down, I feel you. It takes guts to trust once again, to rebuild the courage to be vulnerable and transparent. I recently listened to @zoechurchla podcast on “Trust Issues”, where Pastor @chadveach spoke on how God deals with our faith before He deals with our future. I recommend that anyone hurting, confused, or in need of encouragement listen to it 💜#day5

“And I’ve had someone drop me off coffee,” Hannah Ann said when asked about the last date she went on. “Since times are different, I guess that could be considered kind of a date.”

What are your thoughts? Do you think Hannah Ann Sluss moved on from Peter Weber? Sound off below in the comments section.

A Denim Jacket And Roll Call Has Fans Sure Jana Duggar’s Engaged
Duggar Fans Have A New Favorite Couple: Who Wins The Title?
‘Renovation Island’ Resort: Why Was It Shut Down?
Lauren Burnham, Arie Luyendyk Jr. Reveal Twins Names
Janelle Brown Panics As Wildfire Heads For Their Homes