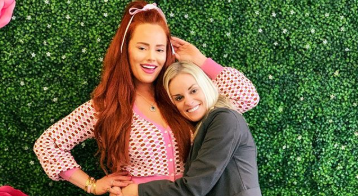 The two met at a Dolphins football game and dated briefly before Season 6 started to film. She reportedly immediately tried to get him on the show. In court he said she told him Bravo, “would pay big money for rights to televise her wedding and honeymoon exclusively.”

In an episode titled, “D**k Moves and D**k,” the three cast members talked about Kathryn Dennis’s boyfriend and said there were nude pics of him. They then Googled the pictures and Bravo blurred out the bottom of the picture. It looked like they could see his genitals in the picture.

Madison said, “Oh. It looks like a Ken Doll. Like, it’s just a bulge. Look at that,, it’s like a ‘mangina.'” Joe says the pictures didn’t require blurring because you couldn’t see anything. He suggested Bravos’ blurring of the picture was, “intentional and malicious.”

He went on to say Craig also made false comments about him. Craig had said, “well, he’s a disgraced politician in Florida. He’s not running for re-election because of his divorce. His wife is accusing him of being physically abusive.” Joe said this was not true and he was falsely compared to Thomas Ravenel which he doesn’t appreciate.

Joe Says The Show Fabricated Relationship Drama Centered Around Him

Joe said he was the one who broke up with Kathryn Dennis and not like the show said. The show portrayed she broke up with him because her cast members were concerned. He said the show caused him emotional distress. Joe said, “the emotional distress suffered was severe such that no reasonable person could be expected to endure.” He reported he lost a work contract because of the way the show portrayed him.

The politician is reportedly asking for 10 million in damages. According to The Sun Joe is suing Bravo and the three cast members for, ” for intentional infliction of emotional distress, fraud, negligence, and defamation. Bravo hasn’t responded to the lawsuit. Craig Conover mentioned it in an Instagram live in passing saying he was served and he’ll deal with it later. Undoubtedly, this is going to continue to be in the news as more of the cast speaks out.