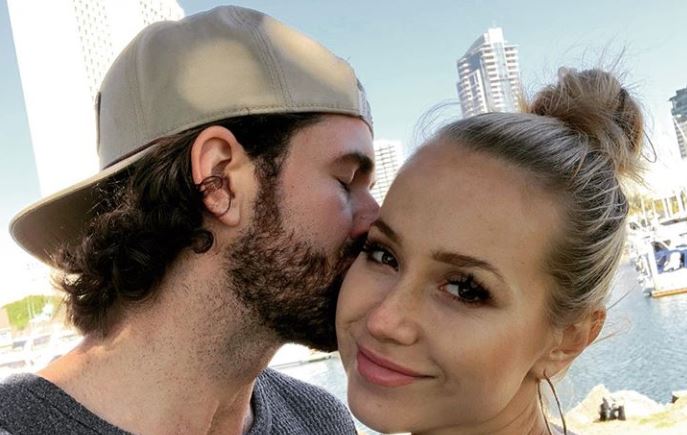 Bachlorette alum Jed Wyatt has been in quarantine with his model girlfriend, Ellen Decker and his sister Lily. Jed says, “This has been a good test to our relationship since we are used to distance.” Ellen is Miami-based and the former Bachlorette contestant is from Tennessee. You may remember Jed Wyatt from Hannah Brown’s season. Hannah Brown was engaged to Jed Wyatt for a short period of time. However, things ended when news broke that Jed had a girlfriend before going on the show.

Therefore, Hannah Brown and Jed Wyatt went their separate ways. Jed seems to have found love with Ellen Decker. Jed said, “It’s been so nice to wake up to her every day and has made me even more excited for our future. She’s just so amazing, and I probably annoy her with how often I just want to smooch her face off. We definitely have come together more, and I’m thankful for that.”

I’ve always been a hot sleeper, tossing and turning throughout the night, but thanks to our new @lullbed I have been sleeping lullvy and cool. Get yours $150 off at lull.com/jedwyatt #ad #getyourlullon

Jed Wyatt And Ellen During Quarantine

They are staying, “in a pretty secluded spot,” Jed said. The buff Bachelorette alum, said that he’s been doing some intense workouts with his sister Lily, and Ellen,” he tells Us Weekly. “After that, we have been putting a lot of work into developing our new fitness program Fit In Twenty that people can do from home.”

When Jed and Ellen aren’t working out, “they slay spicy margs and puzzles” according to Jed. They have downloaded the TikTok app, but have not tried it yet. He’s says, “it’s only a matter of time before we get after it.” Fans can’t wait to see what the twosome comes up with

On The Bachelorette, Jed Wyatt was always playing music for Hannah Brown. He admitted to Hannah on The Bachelorette he only agreed to be there so people could hear his music. He claimed he didn’t expect to fall in love with Hannah in the process. Things may not have worked with Jed and Hannah, but he still has his music.

“This quarantine has provided a lot of time to work on my music. Definitely have enjoyed being at home more.” says, Jed. “I’m hoping to do a cover song with my sister since we have so much time together.” According to Wyatt he says, “he sees himself going on tour in 2020 when the coronavirus pandemic is over with. For now planning a fun filled summer with Ellen, family, friends and music is all Jed Wyatt wants.

Stay tuned to TV Shows Ace to find out when The Bachlorette, featuring Clare Crawley, will premiere.