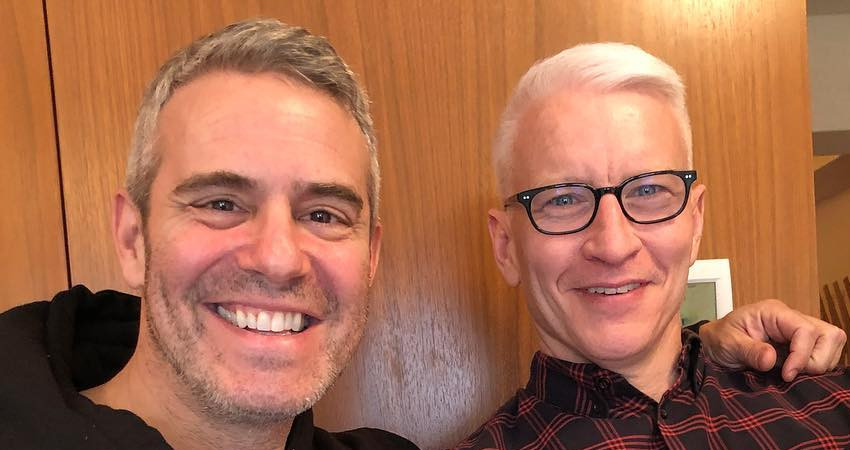 An iconic 80s movie trope involves standing outside someone’s window. Either throwing rocks to get their attention or holding up a boombox. Bravo’s Andy Cohen had a visitor come to his window, but they were holding neither a rock or a boombox.

Bravo host Andy Cohen has been cooped up in his NYC apartment for weeks. The network ceased production on new episodes of Watch What Happens Live due to the coronavirus outbreak.

Earlier this week, Andy received a visit from a good friend of his. CNN anchor Anderson Cooper and Andy have been friends for years. Andy co-hosts the New Year’s Eve special on the network.

However, New York City is under strict isolation guidelines that ban people from socializing. So when Anderson wanted to say hi to his friend, he had to say it from a long distance. While social distancing guidelines say a distance of six feet, Anderson extended that just a bit.

The Bravo exec posted a zoomed-in photo of Anderson on the street under Andy’s apartment. The news anchor was on his bike, holding a cell phone, People reports.

Andy noted in his caption that he had to zoom “10x” to get a good shot of Anderson.

This is about as close as I’ll be getting to @andersoncooper for a while…. (on 10x zoom lens btw!) #ComeToMyWindow #SocialDistancing

Late last month, the Bravo host announced that he tested positive for coronavirus. He immediately isolated away from his son. Andy had already been self-isolating in his NYC apartment.

Hours before he announced his positive test result, Andy planned to resume WWHL from his apartment. However, those plans were scrapped so he could recover from the virus, TV Shows Ace reported.

Andy was eventually given a clean bill of health. He reunited with his son. WWHL also began to tape with guests appearing on video instead of in person. Fans are loving the simpler WWHL, even with tech problems.

During the stay-at-home orders, people are looking for shows to watch. Bravo decided not to release RHONY or RHOBH early, to the dismay of fans. However, they had a good reason for it.

The network reasoned that if people binged the shows early, they wouldn’t have anything to watch if the quarantine goes longer than expected.

Season 10 of The Real Housewives of Beverly Hills premieres next Wednesday, April 15.

Andy recently announced that The Real Housewives of Atlanta reunion will film remotely. TV Show Ace has more details on the RHOA reunion on Bravo.