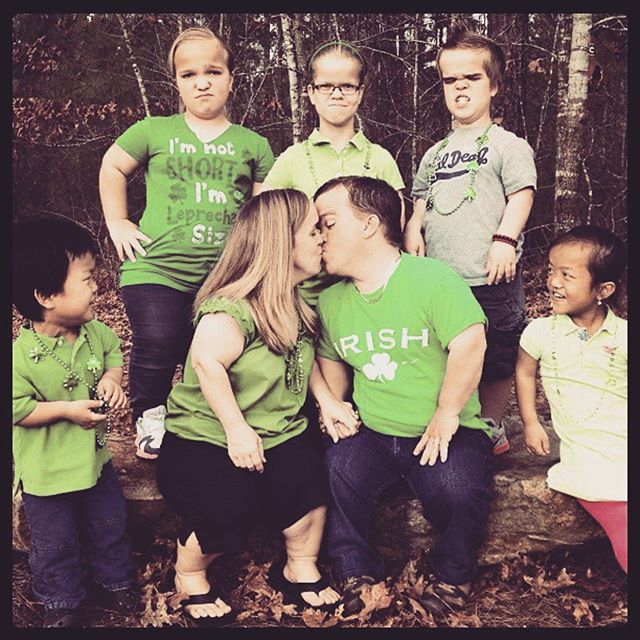 In a YouTube video, Amber says, “Adoption is not necessarily for everybody. However, everybody can be a part of adoption- whether it’s making donations to a specific family that’s adopting or a specific organization.”

Due to pregnancy complications with Jonah and Elizabeth, adoption is a safer way for Trent and Amber to expand their family.

About the Biological Johnstons

Trent and Amber had Jonah and Elizabeth. Trent explains that his wife, Amber, suffered complications during both pregnancies.  However, the couple wanted more children. They adopted Anna, Alex, and Emma.

Amber tells People that Jonah was born premature and spent six weeks in the NICU. She also says, “he’s our athlete- and the most argumentative.” In April 7th episode of 7 Little Johnstons, Jonah tells his mom, “I found out that I didn’t do well in math and I am now, like, asked to resign from campus.”

People describes Elizabeth as the “social butterfly” of the family. At eight weeks old, she had brain surgery, and as a teen, she had ankle and femur surgery. TV Shows Ace recently reported on Elizabeth’s new boyfriend, Brice Bolden. Fans are gushing over Elizabeth’s recent Instagram posts chronicling the couple’s relationship timeline.  Read more about the couple’s proposal here.

About the Adopted Johnstons

Trent says this of his adopted children, “All three of our kids’ stories are different. We traveled to Russia- we were in Russia for 16 days when we got Anna. We did  not travel to South Korea, we were able to hire an escort service to bring Alex to us, and we did travel to China to pick up Emma.”

Check out @fizz4passion bracelets. So many cute and different ones! Link in profile

Anna is the first of the adopted Johnstons. She was raised in a Russian orphanage until she was four-years-old. Amber recollects, “There was an adjustment period. She wasn’t used to men.” Unfortunately, like her brother, Jonah, Soap Dirt reports that Anna is struggling in college. She attends North Georgia Technical college and studies early childhood education.

Trent mentions an escort service brought Alex from South Korea to Georgia. Amber remembers, “They handed over the baby and the diaper bag, and that was that.” 7 Little Johnstons follows the family when Alex has brain surgery due to his central sleep apnea diagnosis. Brain surgery aside, TLC’s bio calls Alex “the jokester of the family.” Alex is now a teenager.

In 2010 Trent and Amber flew to China to adopt abandoned Emma at five-years-old. “She had a meltdown when we left the orphanage, but as soon as we got home she fit right in.” TLC describes Emma as “free spirited and full of energy.”  TLC Tweets that she and Elizabeth are “getting serious with new boys.”

“Our family was created not only by birth, but also by adoption, and Trent and I are extremely proud of that,” beams Amber.