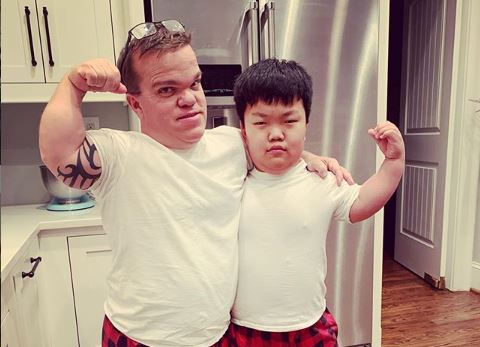 The first few minutes of the 7 Little Johnstons made it clear that, despite the playful title, “Anna Ate My Homework” was not going to be an episode packed with fun and laughs.  Jonah brought home bad news from his second semester in college.  Still, Trent and Amber communicated their love of their son even more clearly than their disappointment, and the 7 Little Johnstons plan to tackle this issue like every other situation—head-on and as a family.

The disappointment in the numbers for Jonah didn’t spoil a day of joyful, dirty fun in the mud for the ladies of the 7 Little Johnstons, complete with tutus.  Trent and the guys didn’t spoil their regal costumes with even a smidge of dirt, but played marvelous cheerleaders. Trent doesn’t get the call that he hoped for following his HIDA scan.

Jonah isn’t welcomed back at college

Jonah didn’t get the grades he was hoping for in his first year in college.  Kudos to him that he didn’t try to sugarcoat the fact that he failed his second semester in math.   Hollywood Life took a sneak peek into the family conversation.  Trent opened with a stern reminder that “procrastination and laziness” would set a pattern for his son’s life.

Jonah admitted that the situation was on him, but also related that “you don’t work with me” in the same way that the  7 Little Johnstons have worked with Anna in repeated struggles.  Amber had wise insight at that juncture.  She realized that Jonah felt a lot of pent-up anger toward his sister, and probably toward his parents, that needed to be vented.  Any parent watching surely commiserated with the tearful mom as she recalled how “you want your children to grow up, and you want them to be close,” but maturity doesn’t always mean that family ties get stronger, especially in young adulthood.

Jonah and Anna may become the best of siblings by the time they reach their 40s, but now, Jonah still remembers playing chauffeur to his sister for months on end, and he says that kept him away from academic achievement.  It certainly looks like some sessions with Dr. Galen Cole will be happening again in the very near future.  Hopefully, the 7 Little Johnstons will see some emotional healing for Jonah and Anna.

It was a beautiful moment to see Trent saying how much he loved his son, and mom and dad never went overboard on how much money they lost.  High expectations and discipline call hand-in-hand with unconditional love in this clan. Growing up never comes without pain.

Trent’s gallbladder and liver examination via the HIDA screening really got the no-nonsense patriarch feeling more positive.  It seemed like he and Amber were on the road to resolving the excruciating pain running down his side to the lower body.

It was a bright Georgia day when Trent got the return call, but his voice wasn’t lifted when he came to talk to Amber on their porch.  The scan results were “all normal,” so it leaves Trent starting “from square one” again, as Amber said.

Season 7 of the 7 Little Johnstons is destined to be filled with as many anxious medical moments for dad as he and Amber have endured for their children.  If the pain is bad enough to keep Trent Johnston complaining and seeing specialists, it has to be a 10+ on the scale. It would be a great gift to the family and their fans to have dad back full-force before the final episode.

Nothing stops the 7 Little Johnstons from having a day of fun, and the family always dives in all the way.  Some of the funniest interplay this week was during the making of the custom T-shirts for the event.  Emma was just having a grand time, mixing up the colors and sizes of her letters, and not paying any attention to keeping them straight in her “Race you to the castle!” message.

Trent has a great idea for his shirt to be the “Princess Protector,” but of course, he had to get his T-square, tweezers, and his level to get everything just perfect for his own garb.

The loveliness didn’t last long after the start of the obstacle race.  Emma tossed her tutu very quickly. Amber wore hers throughout the race, despite being the slowest.  The guys cheered on each family contestant gleefully, and Trent gave everyone hugs, never mind the mud.  Amber praised that the obstacles were “little people-friendly,” but Elizabeth got stuck on top of the tire rings.  It was uplifting and inspirational to see one of the race hosts giving her guidance to make her way down. Anna always seems to have just the right “wrong” comment for the moment.