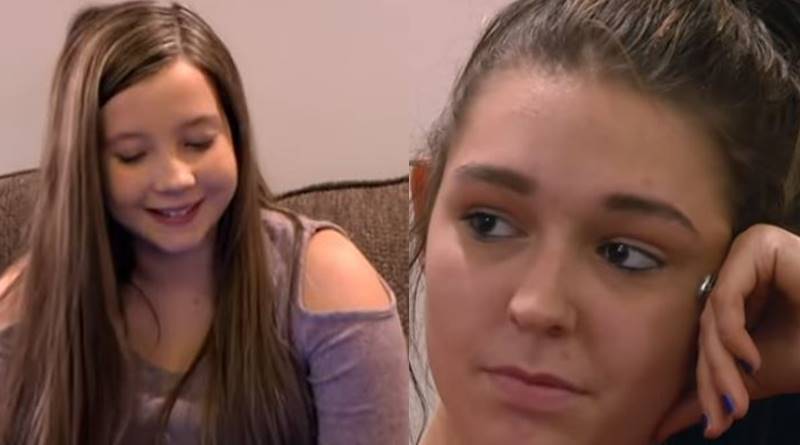 Unexpected fans heard from Hailey Tilford about the birth of Levi. She shared about it on her Instagram Stories, and later posted a photo and explained more about the birth. Many fans congratulated her on that. But, one person of interest also congratulated Hailey Tilford. Haley Tomlinson, aka Hailey 1, also reached out. And, she came bearing an olive branch for her ex-bestie.

Those who don’t now about Hailey 1 and 2’s relationship should understand that these two young girls used to be besties. But, things changed and Matthew Blevins, Hailey 1’s baby daddy to her daughter Kinsley, sat in the middle of them. Fans know that on their season of the Unexpected show, Hailey 2 told Hailey 1 that Matthew texted her a bit inappropriately. Together, they tested the theory. Hailey 1 texted Matthew and he never reacted. But, Hailey 2 texted and he answered straight away. Anyway, Matthew left Hailey 1 and took off with Hailey 2.

Desperately hurt, Hailey 1 later explained in a YouTube video how she felt. To put a long story in a short summary, Matthew got Hailey 2 preggers. They announced the pregnancy during the Unexpected tell-all show on TLC. But, they split several times. Now their baby Levi arrived, and Matthew remains estranged from yet another girl in his life. In fact, he denied he’s the father and didn’t go to the birth. Hailey 2 told him to seek a court order to establish paternity if he wants to see their son. Later, after the birth of Levi, she shared a photo of her son, and Hailey 1 congratulated her.

TV Shows Ace reported that Hailey 2 shared about Levi’s labor and birth weight. She posted her first official picture of the cute little boy. Amongst those who rushed to coo over the cute kid was Hailey 1. She said to Hailey 2, “You did good,” adding, “He’s so cute and I can’t wait for Kinsley to meet him.” Naturally, Hailey 2 responded and she commented about their two kids meeting and how exciting that would be. It’s not the first time she hinted at that. Some months ago, a fan asked her if her baby would meet Kinsley, and she said she hoped that could happen.

The two girls have one thing in common despite their bust-up. Matthew Blevins sired their children. And, both of them got dumped by him. So, maybe they found unity again through that experience. But the bottom line is that these kids are actually half-siblings and are close family members. No matter what the Unexpected dad does, that fact can’t be removed from the equation.

Fans note the maturity of the two Unexpected moms

Grateful fans love how mature these two moms act right now. One commented, “Congratulations he’s sooo cute and it’s so awesome of you and @theyknow.hailey have put your differences aside for the babies. It’s not about you two anymore it’s about brother and sister having a relationship. makes it so much better. I have an amazing relationship with my kids siblings parent 💙.”

After 38 hours of being at the hospital, 15 hours of labor, and unbearable pain, Levi Carter Tilford made his arrival into this world April 2nd, 2020 at 1:14pm weighing 5 pounds 13 1/2 oz 💙 the love mommy has for you can’t even begin to be described with words. You complete me baby.

Do you agree that taking into account the fact their two children are relatives is important? Sound off your thoughts in the comments below.

Would Michael Allio Accept An Offer To Be ‘The Bachelor’ Next Season?
Danielle Busby Brags She’s Not A Regular Mom, She’s A ‘Cool Mom’
Lifetime’s Thriller ‘Murder On Maple Drive’ Is About ‘Murder House’
WOAH!! Jill Dillard Gearing Up To Infuriate Jim Bob Duggar?!
Wissmanns & Duggars Have Been Friends A LONG Time: See Old Photo