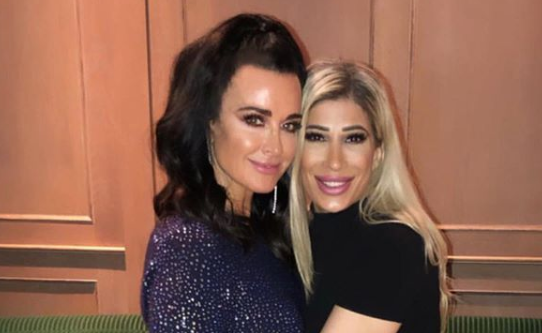 Kyle Richards of RHOBH has been making Tik Tok videos with her family while stuck at home. She opened up to Andy Cohen about her sister Kim Richards and how she was having a rough time. Telling Andy her sister was having a difficult day, she said she was of course, there for her.

Kyle said Kim texted and said, “I’m freaking out, I don’t feel well, can you talk to me?” She told her sister all her symptoms and Kyle told her; we all think we have it every day. She said you’re just having a panic attack. Andy also questioned Kyle about Kim’s upcoming memoir. It seemed he thought that might be a hot button topic.

What Did Kyle Richards Say About Her Sister’s Memoir?

Andy asked Kyle Richards to speak about Kim’s memoir that will be released. Kyle said, “I’ve spoken to her about the memoir she’s writing, yes. We had a little conversation about that.” She didn’t say anything else about it.
According to Reality Blurb both Kyle and their sister Kathy Hilton worry about what Kim will reveal in her book.

Kim’s book, “The Whole Truth: The Reality of it All,” will touch on her battle with alcohol, her childhood stardom, and her relationships with Kyle and Kathy. In a post for her publisher that she later took down she said, “I’ve come to learn that holding on to secrets is like holding on to your breath.”

What Does The RHOBH Star Think Of Caitlyn Jenner Wanting To Join The Show?

Kyle Richards also talked about Caitlyn Jenner when Andy asked what she thought of her for the show. Caitlyn had told ET Online she would be great on the show. She said, “I did watch an episode with you two nights ago, and I honestly kind of got into it. You know, I’ve done reality television pretty much all my life… and I was watching that and saying, ‘I could see myself getting in there with some of the drama.’”

Kyle said, “I think it’d be very interesting, hey!” She also said there is a lot of drama coming up in Season 10 of Housewives. Richards said there will be a lot of tense moments when they all go to Rome. There were already rumors of a falling out with cast member, Denise Richards. No one knows for sure if she falls out with one person or everyone. Fans are chomping at the bit for RHOBH to return.