Hailey Tilford, better known as Hailey 2, of Unexpected just gave birth to her first son. She shared the news and is continuing to keep her followers updated. But, while sharing about him on social media, she has gotten a lot of backlash. So, she took to social media again to respond.

As TV Shows Ace reported, Hailey gave birth to her son after a long labor and delivery. It seems like both Hailey and baby Levi Carter are doing well. On Saturday, she shared a new video on her Instagram story of herself kissing her baby boy. She said that she loves “being a mommy.”

As most parents do, she’s been sharing about him on social media. She announced his birth and shared a few pictures of him. She’s been posting on both her Instagram page and her Instagram stories.

After 38 hours of being at the hospital, 15 hours of labor, and unbearable pain, Levi Carter Tilford made his arrival into this world April 2nd, 2020 at 1:14pm weighing 5 pounds 13 1/2 oz 💙 the love mommy has for you can’t even begin to be described with words. You complete me baby.

Hailey’s social media followers aren’t too happy about how much time she spends on social media. While she was in labor and after she gave birth, she posted on social media. She just wanted to provide her followers with updates so they knew what was going on with her and Levi. Unexpected fans seem to think that she’s spending more time on her phone than she is taking care of her son.

Finally, Hailey decided she had read enough negative comments. She shared a picture of Levi on her Instagram stories. Then, she wrote, “To everyone running their mouth, my son is right here with me at ALL TIMES and is well taken care of.”

She also added, “Keep hating though, it’s cute.” Along with sharing the Instagram story, Hailey has limited the comments on her posts. So, it’s unclear whether the story made an impact on how many hate comments she receives. A limited number of comments are allowed on her posts, and they are mostly positive now.

Fortunately, some of her followers also defended her. They pointed out that Hailey likely had a lot of downtime in the hospital. She may have used her phone as a distraction from the labor pains. And, she could easily be on her phone while snuggling with Levi afterward. Unexpected fans revealed that they did the same thing in the hospital. 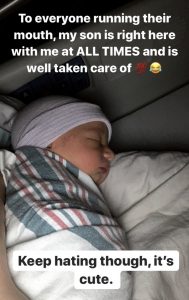 So, what do you think of Hailey having to explain herself? Share your thoughts below.