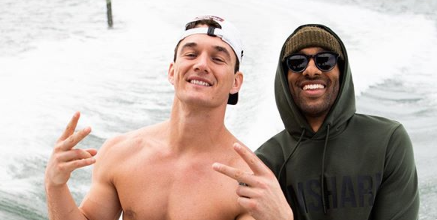 Tyler Cameron and Hannah Brown have been quarantining together. They’ve been trolling their followers on Tik Tok and Instagram with their flirty behavior. Bachelorette fans have been eating it up. Apparently Tyler is paying attention to what fans are saying about their relationship.

Tyler recently clapped back to two fans on Instagram who made comments about him and Hannah Brown. It seems he can take time from flirting and making live videos to comment on fans making comments. One fan posted on Instagram, “Move on people. Hannah will choose the perfect guy for her one day it’s not Tyler. The crew is boring without her. Her and Ryan and Matt were the best.”

How Did Tyler Cameron React To The Fan’s Comment?

Tyler Cameron did see the post and responded with the question, “how many cats do you have?” Another fan said, “you definitely have two personalities. The dear sweet one on ‘The Bachelorette,’ and the one who is acting like a total jerk.”

Tyler fired back, “looks like we got another cat lady on our hands.” He really has it in for people who have cats. Another fan criticized Cameron on his Instagram saying, “Tyler I don’t know why you are choosing this time to focus on working out with random people. It’s just awkward. We’re going through a pandemic and you’re acting like a frat boy.” Tyler did not respond to that fan’s comment.

The Two Finally Separated For A Little While

Fans really wanted there to be something going on between the two. The spent their quarantine time looking for clues they were sharing a bed. Hannah returned to Alabama on April 1. There will be no more videos from the quarantine crew. Fans do wonder why Tyler is lashing out at fans saying he’s not right for Hannah. He could just be bored, or he could really take offense to it.

In a Zoom chat with fans, Tyler Cameron called her, “a good friend.” According to US Weekly a source said they were just friends as well. They said, “it’s been a hectic year for them. They finally found some time in their schedules to connect.” It just happened to be during a time that you have to stay put for awhile. When the time of social distancing passes, it will be interesting to see how fast they hang out again.

So, what do you think of Tyler’s comments? Share your thoughts in the comments section below.