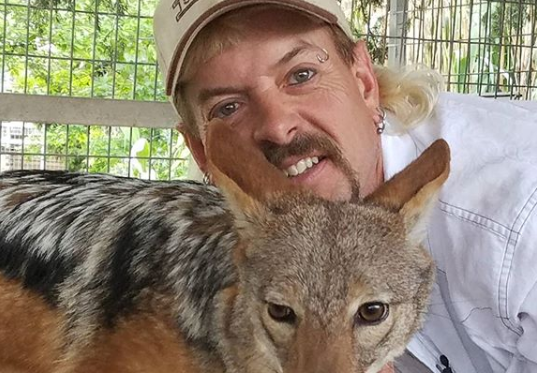 Joe Exotic of Tiger King has become a household name. He’s also the subject of countless memes going around on social media. People trapped at home with the need of a distraction is part of the reason he is so popular. The other reason, him and the cast of characters on the show are just so crazy. Now Joe is speaking out from jail about fame he can’t really experience and squashing his beef with sworn enemy Carole Baskin.

Joe is in jail for allegedly hiring someone to kill Carole and for animal abuse. He said, “It’s now time to turn the tables and Joe get out of jail a free man and exonerated from all these charges.”

Joe is serving a twenty-two-year sentence. His husband Dillon Passage talks to him a couple of times a day at least. He says Joe is loving the attention even though he hasn’t yet seen the documentary.

What Is Joe Exotic Saying From Jail?

In an interview with Netflix, he said, “I’m done with the Carole Baskin saga.” This comes as a surprise because his entire mission in life before was to take her down. Not only her but the other big cat owners he said he had dirt on.

It seems a few years in jail have changed his mind a bit on that. Although, he is suing his former business partner Jeff Lowe and a couple of government agencies. During the interview, Joe Exotic said, “You know, it’d be nice if I could actually see me being famous out there, but I’ve seen these same four walls for a year and a half now.”

According to People, he said he’d still be as crazy when he leaves jail. Fans wouldn’t expect anything else from Joe Exotic.

He Still Calls Himself The Tiger King

Joe said, “As short a time as I was married to Dillon, and still married to Dillon, you know 8 months before I got arrested for all this.” Dillon sleeps in his car and spends his time couch hopping while Joe is in jail. Joe said, “I can’t thank my husband enough for standing beside me.” Fans of the show have mixed emotions about how guilty Joe is or isn’t. Time will tell if he actually can get out of jail earlier and enjoy his fame.