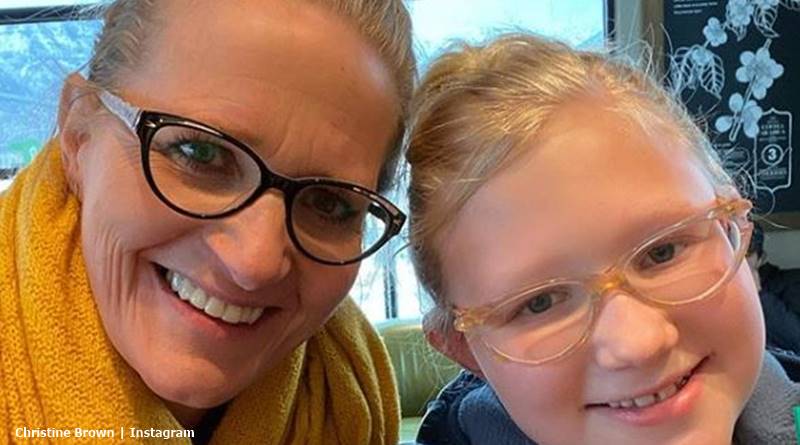 Sister Wives fans heard that Christine Brown’s homeschooling Truely. Like many parents around the world, they slip into their teacher role and attempt to teach the kids. Truely’s learning math at the moment and her mom said she’s very “smart.” But now, Christine’s beyond perplexed by the stupidity of math questions. In fact, Truely said she thinks it’s moronic. Can we all relate to that? Christine shared a hilarious video about that.

TV Shows Ace reported on March 28, that Christine started homeschooling Truely. She mentioned that she volunteers at the school. Plus, she often helps supervise Truely with her homework. But, she noted that they knew Truely had some intelligence. Only, they didn’t realize how smart she is. Well, we reminded readers that loads of TLC fans already know Truely’s pretty smart. She got a lot of kudos from fans after the scene where Kody tried teaching her how to ride a bike.

Recall that in the Sister Wives episode on March 15, Kody tried to put pressure on Truely to ride a bike. He kept at it even though she told him she felt scared. Some fans criticized him for pushing her so fast and with no training wheels.s Eventually, Truely told her dad, “It’s not fair at all,” adding, “it’s my choice. This is my body, and I’m not gonna ride a bike.” Fans loved that she knew enough about herself to know when to tell anyone, that “no means no.”

Now, she works with her mom, and she can’t understand why Christine thinks the questions are moronic.

Hilarious video – Christine doesn’t get it with the math questions

Christine Brown shared a few clips about the math lesson on her Instagram Stories on Friday. She starts off talking about the math question that Truely’s doing. Between Truely and Christine, it turns out that someone needs to measure up something for their room. But the kid doesn’t have a tape measure. So, she uses something else instead. That something else is an eight-inch book. No doubt it goes on with some ghastly question about how many books, etc to measure things. But Christine interrupted and said that it’s simply a stupid question. Why not just go get a “tape measure?”

Truely explains she doesn’t have one and probably can’t get one as they can’t go out. Christine gets that bit. After all, they may be quarantining due to the coronavirus. While Christine argues her point, Truely points out that her mom said the girl without a tape measure must be “a moron.” Christine noted, “this is rubbish.” Then she added, “it would be a lot easier to just get a tape measure.” And, the Sister Wives’ mom admits, the absurd question probably explains why she’s “not a math teacher.”

What did you think of the cute Sister Wives homeschooling clip? Do you agree with Christine that the question’s totally moronic? How’s it going with your homeschooling? Sound off in the comments below.

‘Doubling Down With The Derricos’: Deon Derrico Confirms Season 2?
‘Marrying Millions’: Are Rodney & Desiry Still Together?
‘OutDaughtered’ Fans Dote On Cute Quint PJs: Is That Olivia Or Ava?
‘My 600-lb Life’ Update On David Bolton: Where Is He Now?
Where Do Tammy & Amy Slaton Buy Their Cute Clothing From?