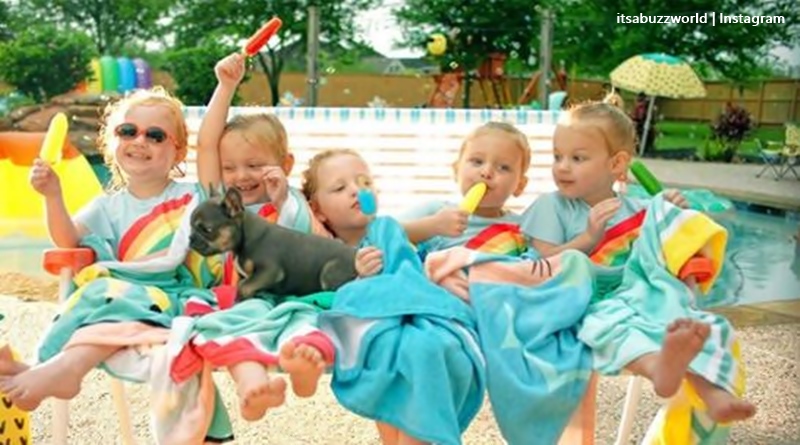 OutDaughtered fans see lots of things that the Busby’s do to keep their kids entertained during self-distancing. Looking at their social media posts, it becomes clear that weekends get set aside for fun times as they normally would do. On Friday, the girls got together for a nail party. Five little hands, ten little fingers work out to a lot of nails! Anyway, fans adore the idea and some of them would love to see the quints in a Disney movie.

Danielle took to her Instagram on Friday night and told fans the family had a nail-party. Her photo showed the quints kneeling in a circle with their little pinkies touching. She captioned the picture with, “Friday night 💅🏻nail party 💅🏻with the quints.” And, her hashtags told a story as well. She used, “#justfiftynails,” “#notoestonight,” and “#quintmom.” Well, fifty nails seem like rather a lot, so probably it’s just as well Danielle left off the toes!

One OutDaughtered fan joked, “5 girlies, 10 nails each, that’s 50 nails to paint! That’s a marathon for the mama!” And, another one said, “Are you high of fumes yet..? Holy cow!” Some fans loved the idea and some of them went off to do the same with their kids. Loads of them loved the fact that of all the quints, Hazel went for a completely different color. In fact, she chose to go very dark. The fans of the Busby family love seeing how their individual personalities come through.

While some fans liked the way that Adam and Danielle split the school days from weekends during social-distancing, others just adore those little kids. One fan suggested, “Your girls should be on a Disney or Warner movie in Hollywood 😍 why dont you take them to a casting?” Another follower thought that a great idea, noting, “I totally agree – they would be brilliant. Just trying to think of one Disney story with five girls in it tho?? Maybe Warner would be better.”

Unfortunately, the OutDaughtered mom didn’t bite at that idea.  But one day, maybe fans will see at least one or two of them in the movies. In May last year, Danielle predicted that she thought the twins could end up in the entertainment industry. The OutDaughtered mom thought Ava and Oliva might lean that way. We reported that she suggested Ava might end up as a performer or dancer and Ava might go in for singing.

What did you think of the idea of a nail-party? Do you think it must take a lot of patience to paint 50 nails? Would you love to see the quints in a Disney movie? Sound off your thoughts in the comments below.