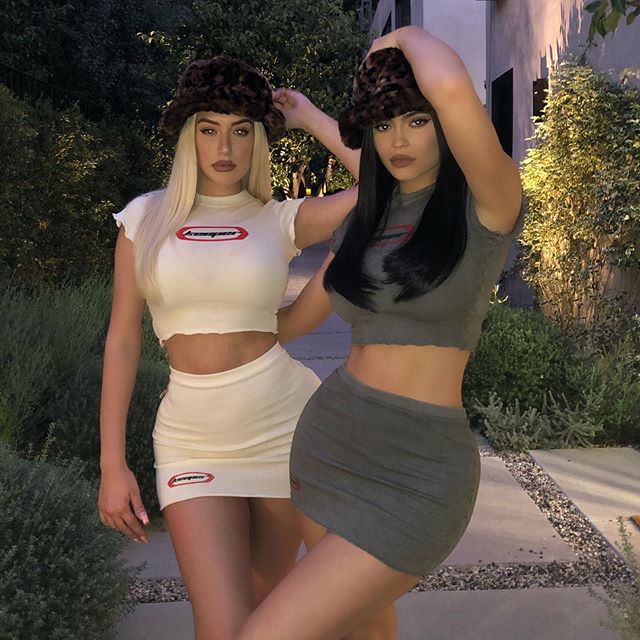 Yahoo!News headlines that Kylie Jenner would rather have a “silent” sexual partner than one with a “weird” accent.

Of all the things to come out of Kardashian-Jenner land, it is unsure how this conversation about preferences comes about. According to Yahoo! News, the conversation came up when Kylie was playing a game of “Would You Rather” with bestie, Stassie Karanikolauo.

was getting a little antsy yesterday so i took some time for myself ❤️ took a nice walk, showered, then got all cute to sit in my living room lol

Friday the duo were taking part in a #doyourpartchallenge in partnership with DoorDash. A fan asked Jenner if she would “rather have your partner have a weird accent when having sex or be completely silent?”

Kylie and Stassie both broke out into schoolgirl laughter.

“I would rather he be completely silent,” says Kylie while smiling.

“Absolutely! I could not handle the weird accent.”

Men with weird accents can rest assured as Kylie clarifies, “Unless he had a weird accent, like naturally. If he had an accent, fine.”

iHeart reports more on the exchange between Kylie and her fans. Another fan asked if she’d rather, “walk around a supermarket in your lingerie or walk around the mall with a strap on?”

Answering again with a smile she wastes no time, “Lingerie in the supermarket because we do that anyway.”

Another fan asks, if she would surrender her phone, or allow everyone to see what’s on her phone for life.

This next answer had fans laughing out loud because it is so relatable. Kylie says, “In my particular case, I would never use a cellphone again. Sometimes I look up weird sh-t on Google, or random sh-t, and I hate opening my Google to weird things. It’s embarrassing, and if 160 million people had to see that I’d choose never using my phone again.”

If you’re like me, you have no idea what the #doyourpartchallenge is. DoorDash is headlining the challenge. It is a call to help DoorDash “help get food to those less fortunate during these difficult times.”

doing our part! we are participating in the #DoYourPartChallenge thanks to @stassiebaby and @ddlovato for the nominations. Send me a dm if you and your family are in need of an extra meal during this time! Thank you to @doordash for helping make this happen love this challenge!! Let’s continue to all do what we can for each other… I nominate @karliekloss @justineskye @shannonnadj 💘 and Justin nominates @judahsmith and @ryangood24 🙂 #openfordelivery

Anastasia Karanikolauou, or Stassie as we now know her, launched the challenge, and since then it’s been seen by over 250 million people. Justin and Hailey Bieber, Demi Lovato, Britney Spears, and Normani all show support for the initiative.

But what about Travis?

While Momma Jenner says she is ready for Travis Scott to propose to Kylie, Kylie isn’t putting labels on the relationship. TV Shows Ace reports more on the non-labeled relationship here.

Fans remember that Kylie and Travis took a break in October. Kylie told People that they are in a “great” place.

This is just all beyond precious 😭😍 Happy Easter 🐰🐥💚💙💛 #kyliejenner #travisscott

A source close to the couple says, “Things are great with Kylie and Travis. They are very happy. Kylie still isn’t labeling their relationship. It seems they aren’t seeing other people, though.”

Tayshia Adams Gives Her Pick For Next ‘Bachelorette’
‘1000-LB Sisters’: Amy Dishes On Tammy’s Spider Bite
‘Young Rock’: What Happened To Andre The Giant?
Is Lala Kent Feeling Anxious About Having Her First Baby?
What Does Camille Grammer Think Of The ‘Frasier’ Reboot?