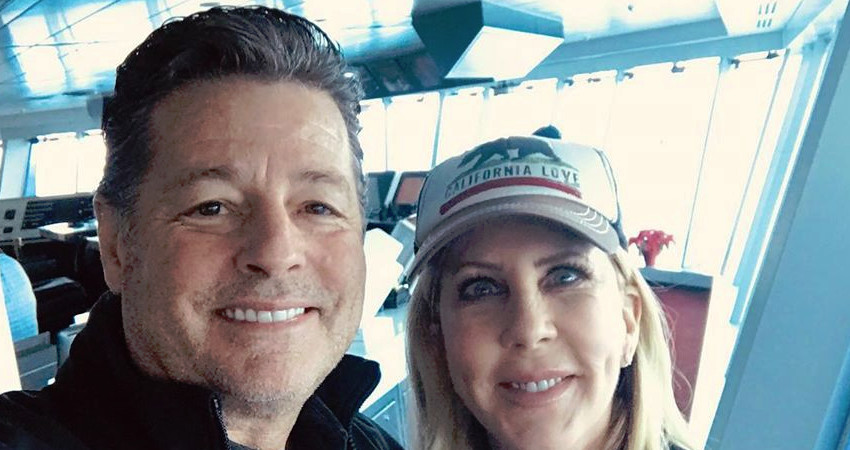 Thanks, coronavirus. Another Bravo star’s wedding (temporarily) bites the dust. The Real Housewives of Orange County star Vicki Gunvalson’s April wedding is on hold for the time being.

Vanderpump Rules star Lala Kent also had to reschedule her April wedding to Randall Emmett until July. Her co-star Stassi Schroeder’s wedding plans for later this year are still up in the air, TV Shows Ace reported recently.

RHOC Star Confirms on Instagram That Her Wedding is ‘Off’

2020 is not starting out great for the OG of the OC. In January, Vicki announced her departure from RHOC after 14 seasons. Her engagement party to Steve Lodge was featured during her last season on the show.

Reality Blurb reported that Vicki and her fiance were supposed to have a small wedding with their combined six children sometime this month. However, travel restrictions and stay-at-home orders have disrupted their plans.

During an Instagram Live, Vicki responded to a fan question about her wedding. She said,

I told [Steve] the wedding is off. We’re doing nothing.”

Vicki assured fans that the couple are still together and still engaged. However, she is not “rushing” to marry Steve anytime soon. According to Vicki, she has other things going on, such as her podcast and her children’s health.

TV Shows Ace reported last week that Vicki’s daughter, Briana Culberson, was tested for coronavirus. As fans know, Briana appeared on the Bravo show during the early seasons of RHOC. She now lives on the east coast with her husband and their two sons.

As a nurse, Briana is on the frontlines of the pandemic. Her husband posted a screenshot of a text from Briana saying she’d been sent home from work after showing signs of coronavirus.

Ryan later updated followers that the test came back negative. However, Vicki revealed on Instagram that she was worried sick about her daughter. She said,

She’s got Lupus so I worry for her immune system, which is compromised. Momma worries and I can’t get there to help her because of the situation.”

Vicki also told fans that her daughter will be a guest on her Whoop It Up With Vicki podcast soon. Vicki’s fiance was this week’s guest. Check out the podcast from the RHOC star below.

Happy Monday! How is everyone holding up at home? Have you listened to my latest episode of @whoopitupwithvicki with @stevelodge_oc? Take a listen and don’t forget to subscribe! #linkinbio #whoopitup #podcasts #stayhome #socialdistancing #covid_19

One thing Vicki isn’t stressing too much is her friendship with RHOC co-star Shannon Beador. Fans were concerned for their friendship after Vicki unfollowed Shannon on social media.

RHOC fans may recall that Vicki and Kelly clashed a lot during Season 14. Vicki says that it “hurt” that Shannon invited Kelly over for dinner now that they are neighbors.

But rest assured, Vicki and Shannon have communicated via text. However, Vicki says that Shannon hasn’t called her recently.

Tell us in the comments if you think Vicki is overreacting about Shannon renewing her friendship with Kelly.

The Real Housewives of Orange County recently halted production on Season 15. Check back with TV Shows Ace for updates on when the show will resume filming.