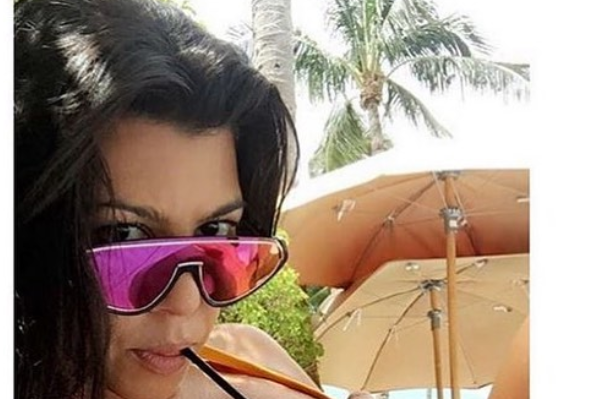 Things continue to get physical between the two sisters in the second episode of KUWTK. Thursday night’s episode started where it had ended on last week’s season premiere. Kim chased after Kourtney Kardashian and slapped her hard. Kourtney came back at Kim with her own slaps and knee drives. All while Khloe is trying to break the sisters apart.

Kendall Jenner and Khloe couldn’t believe what they were watching. One minute everyone is laughing have a good time and the next they are in this big explosive fight. “What is happening right now?” Khloe said. Khloe continued, “I can’t believe it has gone this far for them to physically assault one another. We don’t treat sisters like that.”

A post shared by Kourtney Kardashian Snapchat (@kourtneysnapchat) on Mar 12, 2020 at 3:16pm PDT

Kourtney Kardashian On the Defense

Kim Kardashian decides to leave the room to get some space from Kourtney. Kendall Jenner is cleaning up Kim’s wounds while Khloe has a talk with Kourtney Kardashian about why she did what she did. Kourtney goes into complete defensive mode again. Kourtney said to Khloe, “don’t take someone else’s side, that’s my issue with you.” Khloe starts cleaning off the walls where they have smeared their makeup. Kim suggests that Kourtney leave since she complains so much about being around them.

Kourtney is wiping away tears and tells Kim and Khloe that, “she’s not here to listen to this false narrative every day from my family.” Before Kourtney leaves out she tells Kim and Khloe both, “she can’t stand either of their attitudes,” and yelled at Kim “I don’t want to be around your fat a–, OK?” Kim yelled back at Kourtney and says, “you’re actually the fat one.”

Will Kourtney Continue To Film With Her Sisters

Off camera Kourtney and Kim have a conversation off camera to apologize. They agree to never let their differences cause them to physically assault one another. The sisters go on their trip to Armenia and have their kids baptized.

When Kim and Kourtney Kardashian get back from their trip they sit down with Khloe. Malika and Khadijah Haqq, Khloe’s two best friends serve as mediators. As the meeting continues and Khloe tries to speak her peace, Kourtney interrupts which is frustrating to Khloe. Kourtney is upset with Khloe because she never expected Khloe to act the way she does.” Kourtney thinks Khloe may be unhappy in her own life and feels the need to have this attitude every day with her.

According to Yahoo.com, in the end, Kourtney says, “I’ve decided to step back from filming and only film the things that I think are important and want to share with everyone.” You can watch KUWTK Thursday’s on E!