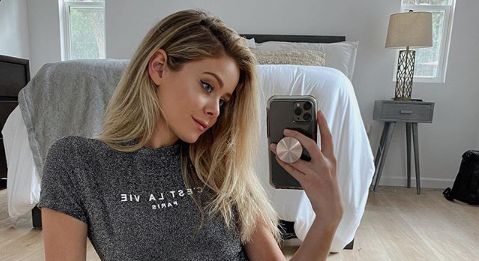 Hannah Godwin and Dylan Barbour are not in a rush to get married. They’ve always been happy to take their time. Now that the virus has stopped them from leaving their home they are able to talk more about it.

On the Almost Famous podcast, the two talked about what their wedding might look like. Dylan said, “we learned from the engagement party that we’re going to try and keep it really small.” He said that meant around three-hundred to five hundred people. “We aren’t excluding any of our friends.” That is a pretty big wedding.

Did Hannah Godwin Agree With Having That Many People?

Hannah Godwin said she thought more like 180 to 200 would be better. She said, “the time has definitely made it a topic that can come up. We’re also not super rushing it.” Godwin said they were looking for houses for fun and may move in together at some point.

She also shared they binged Tiger King, the Netflix series everyone loves. Dylan told what he would look for in a venue. “I want there to be some type of greenery and some body of water,” he said. He also said he had ten spots already spoken for in the bridal party.

What Is She Looking For In A Wedding Dress

Hannah Godwin said she, “wants to blow Dylan’s socks off and have no clue.” She said she doesn’t know what she likes and doesn’t want to be too picky. It won’t be too hard for this girl to find a dress she looks gorgeous in for her big wedding day.

Previously they said they’d learned a lot about each other through this quarantine. According to US Weekly, Hannah said, “I’ve learned that Dylan has zero fear when it comes to expiration dates on food. Pretty sure we used two-year-old mustard the other day. Honestly, not too bad!”

Dylan said, “I didn’t know Han liked banana pancakes till I made them the other morning. “Now, they’re on my regular breakfast menu.” It seems they are making the best out of being together in quarantine together. Fans look forward to a wedding once social distancing is over. Bachelor in Paradise might be delayed because of the Coronavirus, they’ll need something to look forward to.

Make sure you don’t miss The Bachelorette when it returns to ABC. Right now, filming of Clare Crawley’s season has been put on hold due to the coronavirus.

Tori Roloff Shares ‘Touching’ Message Amid Heartbreak
Rumors Swirl Around ‘Dancing With The Stars’ Season 30 Cast List
Todd Chrisley Reveals His Vision Is Now A Reality
Is This A Sign ‘Bringing Up Bates’ Will Be Canceled?
Lifetime Announces ‘Switched Before Birth,’ Directed By Elisabeth Rohm