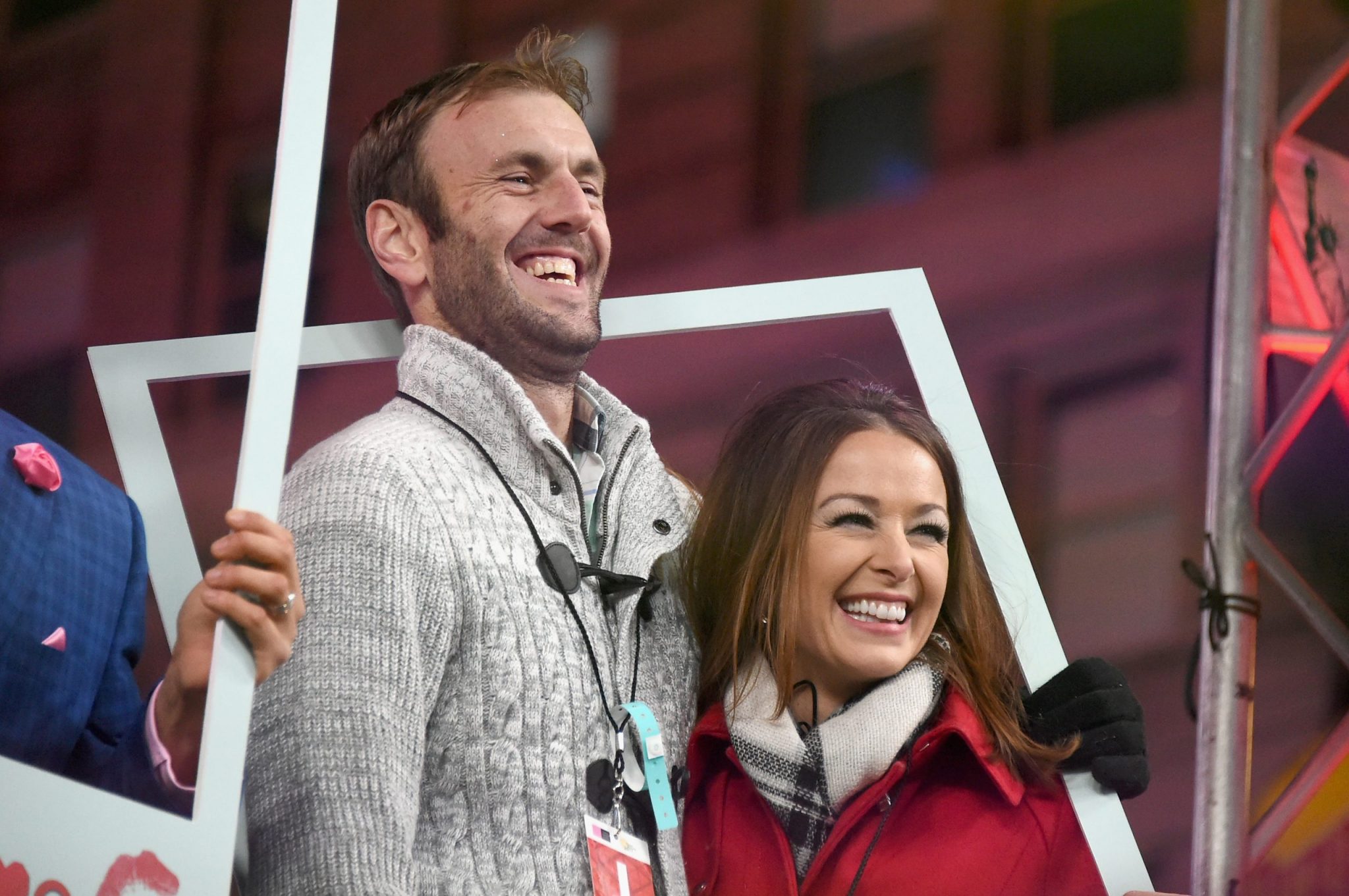 Like the millions of other viewers, the Couples Couch convened on April 2 to watch what became the most traumatic and tempestuous couple’s retreat in Married at First Sight history.  Considering the arc for the current Season 10, the outcome was no surprise. Still, the behaviors, the feuds, and the choices made by some partners were shocking and pathetic.  Only one couple gives a beacon of hope for a lasting bond.

Jamie Thompson and Beth Bice sat in with Kristine Killingsworth and hubby, Keith Dewar from Season 8.   Ashley Petta and Anthony D’Amico from Season 5 got cozy with Shawniece Jackson and Jephte Pierre from Season 6.  Nobody on Couples Couch was comfortable with most of what transpired in this week’s “Flight or Fight” episode.

Brandon Reid has a bone to pick with Taylor Dunklin (again!) before the pair pack their bags and set off to “drive up” for what is meant to be a weekend of drawing closer. Newsweek probed into the rising tensions in an April 2 feature. Brandon details that Taylor went “to see her friends” for what she said would be a few minutes.  The next contact Brandon got was at 3 AM, and then he didn’t see his Married at First Sight bride until the next morning.   He said he needed to get “some answers” on the retreat.

Taylor never mentions her late-night escapades, even though every couple on Couples Couch is screaming for her to “tell the truth!”  Thompson’s and Dewar’s are the most expressive.  Instead, Taylor goes on and on about how much she is doing to make her marriage work as she talks with the other wives.  Brandon stayed tuned into his phone and throughout the drive, and he quickly excused himself and went off to pow-wow with Michael.  “The two negatives find each other!” Beth shouted, and she would repeat it several other times.

Meka and Michael didn’t have a very pleasant car ride, either.  Ashley and Kristine gave Meka points for at least holding out positive goals and hopes. Michael looked straight ahead and rubbed his beard, as always.  These two still look like hostages together.  As soon as Michael got to the house, he opened some black-label whiskey and his participation was history.  He seemed to be waiting for his buddy, Brandon, to arrive.  Kristine chimed in that Michael “is a piece of ….work.”

Derek was the only one who even asked about Mindy and Zach, and until then, Ashley and Anthony from Couples Couch had not even noticed the missing and blessedly divorcing couple.  As noted in the inserted media, Jephte commented that there was so much drama, this was their best episode yet.

Katie lets out a roar from the green-eyed monster

Things were already a bit testy between Katie Conrad and her husband, Derek Sherman, on the drive up.  He was singing and spirited, and she said:  “You’re weird.”  “I know,” Derek answered.  She asked about past relationships, and why love never came.  Derek responded that he probably never “opened my heart” to the possibility.  Soon, they were thanking each other for the positive steps each was making, and they arrived on good terms. One plus for these two is that they do seem to always work toward making up.

The first to arrive always gets the best room, and Katie and Derek had a delightful time opening “all these doors” as Derek said, and finding lavish accommodations everywhere.  By the time that Jessica and Austin got there, Katie seemed to be working herself into a stew.  Jessica had insisted on bringing the crock pot, and it was hilarious to see her husband carrying the appliance all over the house, saying “I gotta find the kitchen!”  Everyone on Couples Couch breaks into smiles just to see these two Married at First Sight matches.

The discussion about disappointments and first fights was deflected as the wives went to prepare a taco dinner, and of course, tequila shots were in order.  Everyone at the table started off by downing a big gulp.  Brandon and Michael refused. Brandon said he had to work all day the next day, but he didn’t mind spending hours venting with Michael.

Anthony saw that Derek was a “tappy boy” with Taylor, frequently touching her shoulders.  Jamie didn’t see anything maliciously flirty in the gestures.  Katie, however, couldn’t hide her rage as she watched Derek and Taylor giggling with glee.  She stormed off to the bedroom, saying she wanted to barf.  Jessica and Meka came a few minutes later to listen.  The immaturity sometimes shows itself big-time between these youngest of the Married at First Sight hopefuls.

Jephte quipped that “she doesn’t like my jokes and she won’t let me have my dreams” regarding Derek and his bride.  Katie tells the girls that it’s not enough to “be a good guy.”  She wants more initiation from Derek.  When he tries to talk to Katie, she’s not having it, and she takes off out the door, saying:  “Please don’t follow me!” Beth playfully admits that a girl means just the opposite from that command. The talking doesn’t come to anything for the couple this time, and Derek takes comfort in more tequila.

The next morning, the Couples Couch sees Katie and Derek snuggling again, and declaring “no fights today!”  Derek “hijacks” a golf cart and he and Katie go for a joy ride around the estate.  Kristine marvels at how happy Katie can be during the good moments.  Ashley marvels that Katie called her jealousy “low-key.”  “That was not low-key, Katie!” Ashley reminds.

Every eye on Couples Couch was wide with disbelief over Brandon’s beyond bizarre behavior and he had an accomplice.  Brandon and Taylor battle over her late-night behavior.  She says she feels justified because she had to drive to DC to take Brandon to work.  The B-word and many more were hurled back and forth.

Immediately after, Brandon becomes wicked with the Married at First Sight production team,  stripping his microphone and saying that “you’re not going to get the shot you want.”  Jamie Thompson is stupefied at the attack on people “just doing their jobs.”  “You don’t treat people like that,” Shawniece exclaims.  Please, producers and experts, probe much deeper into motives for being on the show next season, and don’t cast people with camera phobias or anyone wanting to boost a social media profile.

Shawniece bursts into laughter, not believing the behavior, asking “am I watching Married at First Sight or a soap opera?”

Some of this behavior appears downright pathological, and when Taylor tries to corner Brandon, no purpose is served except to heighten the situation.

The next morning, Brandon leaves for DC, with Michael tagging along, with no notice to Meka.  At one point, Brandon shuts himself in the van refusing to speak or anything else. “This is going sideways,” says Michael– that could apply to the entire situation for these grooms.  Ultimately, both guys go to DC, and Meka and Taylor take an excursion to a paranormal house.  “Paranormal” seems the perfect word for the Season 10 Married at First Sight odyssey and everyone on their Couples Couch was more frightened by the struggles of the retreat that anything from a spirit.

Jessica and Austin remain a light of hope for this season.  Jessica is still stunned by the situation of Austin traveling for work, but so many fans are pulling for their devotion to pull them through the dispute.  The couple went to some caverns for their excursion during the couple’s retreat, and seemed to be counting their blessings to have each other.

During one juncture, Jessica explained that “I just ate my macaroni and cheese and the steak and called it a night,” as her strategy for rising above the conflict around her.  Jamie applauded, noting “that’s what you gotta do,” with a dose of Couples Couch practicality.  For him and Beth, their retreat was pivotal in helping them to keep their love permanent.

There’s only one more episode before Decision Day, so these couples have to get serious about what they are going to do with their future.