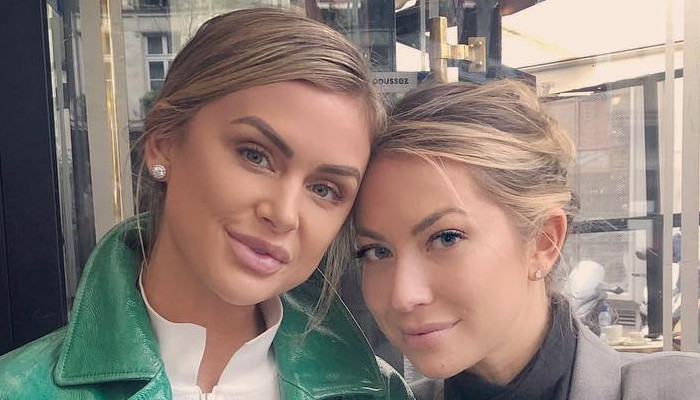 Stassi Schroeder is the reformed mean girl of Vanderpump Rules. In the early seasons, she excluded co-stars Scheana Shay and Lala Kent because she considered them “homewreckers.” As fans know, Scheana had an affair with actor Eddie Cibrian while he was married to RHOBH star Brandi Glanville.

Lala, on the other hand, was dating a mystery man on the down-low. For several seasons, she wouldn’t allow her co-stars to utter his very name. Of course, now we know her ‘man’ is Hollywood producer Randall Emmett who was still married at the time they began dating.

Now that Lala’s relationship with Randall is out in the open, fans are seeing Randall on Vanderpump Rules. The couple’s April wedding is in July now due to the coronavirus crisis, as TV Shows Ace reports.

Speaking of weddings, Stassi recently gave an update on her October wedding, which she hopes to have in Rome, Italy.

Vanderpump Rules stars Lala and Stassi did not get off on the right foot. When Lala started at SUR as a hostess, Stassi was still dating co-star Jax Taylor. As fans may recall, Jax openly flirted with Lala, though they both claim nothing ever happened between them.

After Jax and Stassi broke up for good, her relationship with Lala improved. Stassi and the rest of the VPR crew’s ill feelings toward Lala thawed immensely after she gave them a ride on Randall’s private jet.

Now that Lala’s on good terms with the gang, she’s turned her attention toward a VPR newbie. Raquel Leviss got a job at SUR between Seasons 7 and 8. She’s also dating Lala’s former hook-up, James Kennedy.

Last season Lala was dealing with the unexpected passing of her father. She also recently revealed that she is an alcoholic and never filmed an episode sober. Those two things created a perfect storm for her to lash out at Raquel repeatedly.

During one argument, Lala uttered the now-iconic insult by calling the SURver a “Bambi-eyed b**ch.” As far as insults go, it’s up there in VPR history with Stassi telling Jax, “I am the devil and don’t you forget it.”

During last week’s episode of VPR, Lala brought up an old rumor about James cheating on Raquel with a male friend. The two argued again in this week’s episode and Stassi had some thoughts on Lala’s behavior, Reality Blurb reports.

Appearing alongside Lala on the After Show, Stassi admitted that Lala “bullied the f**k” out of Raquel. The best-selling author said to Lala that her behavior was “so scary.” Stassi said,

“If Lala were to yell at me like that, I don’t think I could…”

Lala cut in and said she didn’t realize she was being scary. She thought her behavior was normal. Lala said on the After Show,

Many Vanderpump Rules fans were #TeamRaquel on social media during and after Tuesday’s episode. They felt that Lala, or “Lauren from Utah,” as many like to call her, was out of control. While fans were slow to warm up to Raquel, they don’t feel she deserves Lala’s bullying.

Lala must have felt bad for how she treated Raquel during filming this season. After the show, she took to Instagram to publicly apologize to the SURver. Sharing a photo of the two of them, Lala captioned the snap with, “Raquel, I’m sorry I’ve been an a**hole…”

The VPR star promised Raquel that their relationship will be “onward and upward” going forward.

Raquel, I’m sorry I’ve been an asshole. “If we can’t all agree Lala’s a bully, we can all agree she’s a bitch”. This had me rolling. Nice work on that bite 👏 it’s onward and upward from here, I promise. @raquelleviss A NEW EPISODE AIRS IN 30 MINUTES, WEST COAST!

While Lala apologized to Raquel, she did not extend that apology to the fans. A day after her apology post, Lala was back on Instagram. This time, she shared a candid photo of her at home, coloring in a sketchpad.

The long caption starts with “I have never and will never be someone who cares what people think of me [on TV.]” Another part of the caption implies fans have tried to shame her for her behavior but Lala says “Life is too short.”

While she’s not apologizing to fans, she does thank them for watching VPR even if “you don’t love me.”

I have never and will never be someone who cares what people think of me when it comes to what they see on Vanderpump Rules. To me, everything comes with the territory. We pop off, we act out, it is what it is. My fighting style has been this way for quite some time. I’ll own when I’m wrong or when I’ve gone too far, but to live in shame, that’s not happening. Life is too short. I love being on Vanderpump Rules, I love the process of filming, I love how everyone’s outlook is different, I love when people go toes, and I love when people make-up even more. At the end of the day this is reality TV and I want to thank y’all so much for watching. I love you, even if you don’t love me ♥️

Tell us in the comments if you think Lala’s apology to Raquel was sincere.