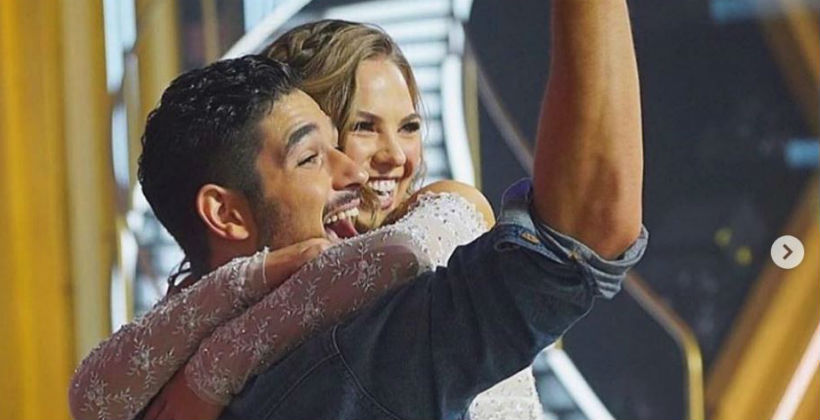 Former Bachelorette and Mirrorball Trophy winner Hannah Brown reunited with another man from her past. And, one that also had sparked numerous dating rumors. Hannah left Jupiter, Florida Tuesday night where she had been quarantining with Tyler Cameron, his friends and brothers. She returned to Alabama to spend time with her family. Following her arrival back in Alabama, Hannah had a surprise for fans. She reunited with Alan Bersten.

US Weekly shared news of the reunion that took place over Instagram Live. This happened today following Hannah’s return from Florida. The hangout began with the two practicing their paso doble routine from Season 28. The duo talked about their time as dance partners on the show. During that time they grow very close to one another.

They both admitted they often got into little fights during their time together. Alan said, “We would get in these little fights, but we would always make it better before we left.” Hannah added that she would often threaten to not be his dance partner anymore when they fought.

Hannah said, “It was very passionate.” Alan added,  “We both wanted to be the best.” Hannah followed that up with saying they are still great friends even with all the silly arguments. Alan also admitted that one time he had traveled with Hannah to Alabama so she could attend a friend’s wedding. He went so they could also continue their rehearsals.

What are their plans now

After their dance and discussions about their friendship the two vowed to do another video soon for their fans. Hannah joked saying, “I’ve got, like, a crazy agenda.”

So what happens now? Fans are really hoping Hannah and Tyler are dating again. The two really vibe well together and have what looks like tons of fun. Matt James shared the news that Hannah had went back to Alabama via Instagram. He said, “Breezy is back in Tuscaloosa, Alabama. Her and Marshall drove home late last night. They want to ride this thing out with their families.”

Hannah didn’t really say why she had left, but she did say she had not been herself for the past few days. Hannah said, “I’ve slept all day and when I haven’t slept I’ve eaten. The past three days I’ve kind of boycotted everything and just ate. So I’m going to get back on trying to be healthier.”

“Maybe I want to cook,” She continued, “I’m going to work out some more, try to do some fun things. There are so many options right now. Maybe climb a tree in my front yard.”

Stay tuned for more information as it comes up about Hannah, Tyler and Alan.