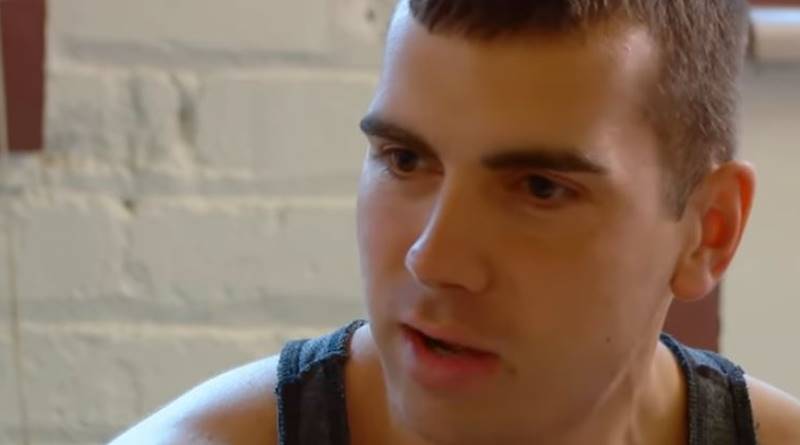 90 Day Fiance fans heard from Emily Larina earlier this week that Sasha seemed very ill and she feared he contracted coronavirus. She took him, to the ER, but they sent him home. As he got worse, finally, they tested him for coronavirus and they had to wait 48 hours for the results. But now, she reported that even though he’s still unwell, he’s improving.

TV Shows Ace reported that Emily described Sasha’s symptoms as mainly located in his stomach region. She noted he suffered from a lot of pain with cramps. The hard part came when she sat at the hospital while doctors examined Sasha. She couldn’t see him during that time. When she took him home they had to wait for a further 48 hours to know if he actually has coronavirus. Many fans stressed about Sasha as she didn’t actually update them after 48 hours on the outcome of her husband’s test.

What they did hear again from Emily via a post that blogger John Yates shared, she slammed critics for suggesting Sasha was irresponsible enough to “go out” while they suspected coronavirus. She reminded critics that gastrointestinal symptoms occur in about “10% of COVID cases.” She also told them that they would “never risk spreading the virus to other pe0ple.” Actually, it looks like despite the seriousness of the illness, some 90 Day Fiance followers trolled on them. Even after she shared that, critics on John Yates’ Instagram suggested they just looked for “attention.” 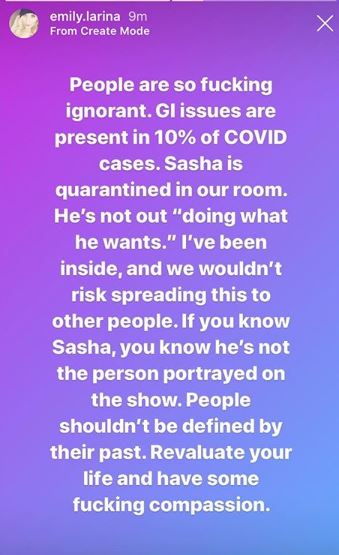 Some trolls complained that Emily should keep her business to herself. But actually, that might not be a fair assessment. Everyone knows that most TV personalities like Colton Underwood and Andy Cohen quickly disclosed their tests online. Perhaps that says something about TLC followers and Bravo and ABC fans. Nevertheless, there are many decent people out there who asked Emily for more news and sent their love and prayers.

Nothing more came about Sasha and his progress until April 1. It certainly looks like he might have had the virus, although Emily never said as much in actual words. However, the 90 Day Fiance alum posted about how she and her son keep themselves amused while Sasha’s in isolation. So, they take it very seriously. With the newest update, it looks like Sasha might be turning a corner.

In her latest Instagram Story, Emily noted Sasha seems a lot better. She’s been giving him vitamin C, which some doctors recommend to help boost the body’s immune system. In fact, Medicine Net noted China hoped it could assist with fighting the disease. However, not all medical professionals think it works, and it won’t actually cure the virus. But, Emily’s good news is that Sasha’s temperature dropped at last.

Emily said, “his body temperature finally went below 100 yesterday.” Then, she said that he ate a meal. “We seem to have turned a corner,” she noted. 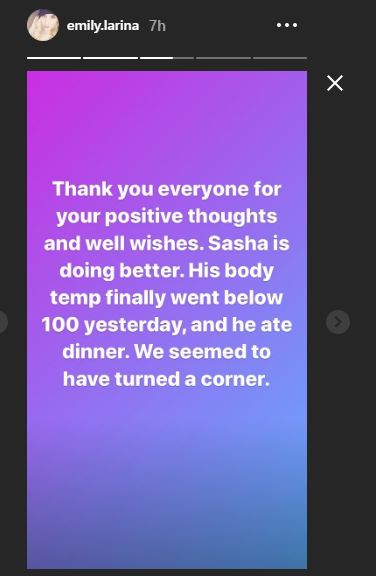 What do you think about the news that Sasha “turned a corner” during his coronavirus scare? Are you happy to hear that it sounds like he’s on the mend? Sound off your thoughts in the comments below.

Remember to check back with TV Shows Ace for more news on Sasha and Emily and the rest of the cast from TLC’s 90 Day Fiance.