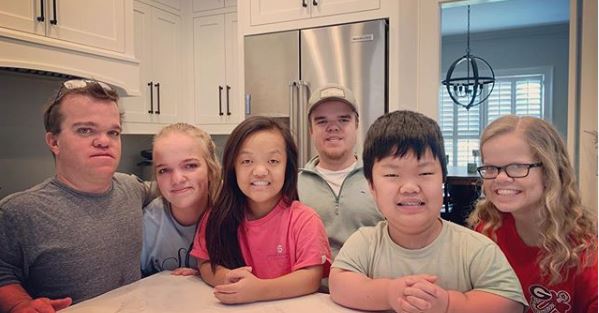 Millions of faithful viewers were rewarded when the 7 Little Johnstons returned to the TLC schedule on March 31.   The kids are all teenagers now, and not everyone is excited about growing up and becoming an adult. Nonetheless, in this week’s “Summer Lovin’” Season 7 premiere, there was plenty of fun and love for everyone. Trent finally got some answers about the pain scare that has left fans wondering since the Season 6 finale of 7 Little Johnstons.

Trent Johnston doesn’t even wince when a plywood board falls on him or a stray nail ends up through his finger.  This guy knows how to handle pain.  In the closing minutes of Season 6, however, the 7 Little Johnstons’ patriarch was in such pain that he drove himself to the emergency room.  Fans were left to only see him suffer in the ER and wonder about the outcome.

Trent explained in the premiere episode about the multiple tests and blood work submitted during his ordeal.  The results returned with all indications normal.  Trent was told to visit his primary care doctor and monitor his health.  “I have good days and bad days,” the papa reported.  He was having a good day when he, Amber and the kids enjoyed themselves on a homemade slip ‘n slide in the yard.   On other days, however, “I can barely move.” He stresses that “I’ve been through this before with things.” The determined dad realizes that being a little person brings unique physical situations, but not having an answer is getting really frustrating.

After the sixth consultation with his family doctor, it was suggested that the 7 Little Johnstons chief Johnston go in for a special HIDA (hepatobiliary) screening.  The exam is rather involved with intense views of the gallbladder, liver, and bile ducts.  Amber discussed how adjustments to Trent’s diet had already been made.  Trent’s symptoms would go away, and still return after certain foods were eliminated.  The 7 Little Johnstons couple sweetly held hands during the screening.  Hopefully, Trent will get some real answers soon about the pain that runs from his side to the whole lower half of his body. Fans will just have to wait with the family for the results. TVShowsAce revealed the trauma last May.

Always in the mood to dance

The 7 Little Johnstons never seem to let anything get in the way of a good time.  This week, they staged a full-production version of their own “Grease” spoof, “Little Greasers,” and danced their little bottoms off!  Trent and Amber were the perfect Danny and Sandy, and their girls loved playing the Pink Lady crew.  Trent didn’t seem to be feeling any pain during his moves.

Amber stressed in a Hollywood Life feature on March 30 that the 7 Little Johnstons were not aiming for a “good” effort.  “We wanted it to be fantastic!” It was, and fans will surely treasure it as a keepsake from the family’s TLC run.

Along with becoming their favorite alter egos, the family got some news when they all watched “Grease” together.  Elizabeth confirmed that she and Brice are officially dating, and both are delighted with their romantic situation.  On a fishing date, Brice insisted “I could see myself with her for a long, long time.”  He added, “I could never leave her. “

The pair will already have to deal with long-distance love.  For Brice’s first semester of college, he will be nearby but move two hours away from starting with the second semester.  Elizabeth will be finishing up her senior year of high school.  This sweet duo has family and loads of 7 Little Johnstons fans cheering them on to lasting love.

Elizabeth is older than her little sister, Emma, but that doesn’t keep the eighth-grader from being in love.  She and Luka met at last year’s little people convention in Orlando, and the youngest daughter in the 7 Little Johnstons clan is in constant face-time communication with her beau.   She insists that “we’re not boyfriend and girlfriend, because I can’t date till I’m 16.”

The cuties are not too young to say “I love you.”  According to Emma, that started after only a week.  Emma and Luka can’t wait to see each other in person again at this year’s convention in San Francisco. Their families plan a get-together, too.  Luka is even working to find the perfect man for Anna, because “he knows everybody.”

Amber and Trent took Anna to North Georgia Technical College for a tour.   Let’s just say that the 7 Little Johnstons’ daughter is not excited about dorm life in the least.  She discussed with the camera crew how living with a roommate was like “sleeping with a stranger” and even seeing the room was “scary.”  She stressed that any potential roommate “could be a criminal,” and no matter how she might feel ready for college, she is not ready to leave the nest.

Mom, dad, and all Anna’s siblings, though, know that Anna needs to spread her wings and gain some independence.  An added benefit, as Alex puts it, is that “it’ll be a lot quieter.”  Family and friends had lots of fun celebrating Anna’s high school graduation.  The headmaster saluted each graduate with personal remarks.  He noted Anna’s “wit, humor, and banter.”