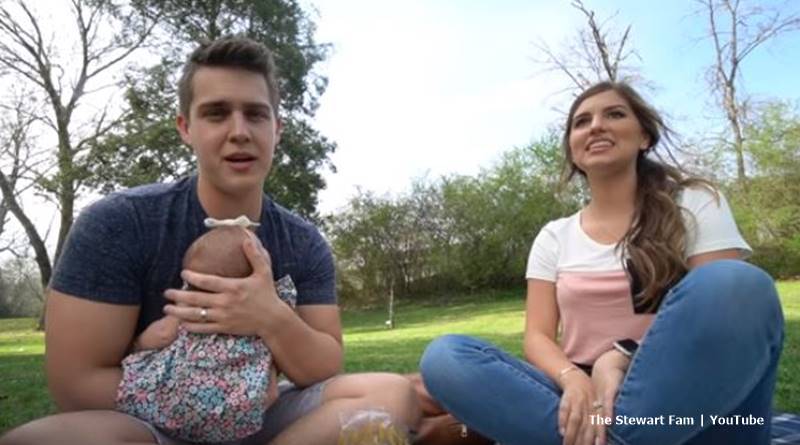 Carlin Bates and Evan Stewart launched their own YouTube channel in January this year. The launch was announced by Carlin on her Instagram account. At the time she explained that the videos will mainly show the special moments in their life. Now, they have uploaded a video all about how they met. And, Carlin revealed she actually dated someone before she met Evan. So, who could that have been?

TV Shows Ace reported that shortly after Carlin shared about their channel, the channel quickly gathered over 4k subscribers. Promising content that shared their special moment as they start their married life, she later popped up some content. Their first video featured a short intro. Then, they quickly delivered more. There’s one about their maternity shoot and another about the first time their daughter Layla went to the doctor. Now, it includes videos like an emotional day, how stressful parenting can be, and more.

Already, Carlin Bates and Evan Stewart have garnered over 32k subscribers. And, the video quality’s actually very good. Fans can’t get enough and it’s encouraging to see they promised content and deliver regularly. After all, lots of people start YouTube channels, promise content and then don’t post anything. Their latest video revealed how Evan and Carlin met. It started off with them sitting on the lawn and then cuts to them dancing. Then they showed baby Layla.

Carlin dated someone else before Evan

The video’s embedded further down in this article so can you watch it here. It runs for just over 18 minutes in total. And, the interesting thing that emerged, is that Carlin previously dated another guy. In fact, she even admitted she didn’t break it up either, so it looks like she got dumped. However, she never mentioned the name of the guy who lost out on a life with her. But, Cheatsheet speculated on who that person might be. According to the outlet, a lot of things point to it maybe being Joe Duggar.

One reason that they think it could be Joe is that he spent quite a lot of time at the Bates’ place before he married Kendra Caldwell. The reason he spent so much time there relates to him attending bible college in the area. Also, the outlet noted that the timeline for the possibility of dating Carlin Bates fits perfectly. He featured in the Bates’ family photos up until about six months before he officially started courting Kendra. Well, fans might never know, but whoever it was, they think he lost an opportunity for a life with a wonderful person. One person wrote, “Who who who would be insane enough to dump Carlin … seriously. That shocked me.”

What do you think about the news that Carlin Bates previously dated another guy? Can you believe that someone didn’t want a life with her? Could it have been Joe Duggar? Sound off your thoughts in the comments below.

Remember to check back with TV Shows Ace often for more news about Carlin Bates and Evan Stewart.

Netflix Debuts Sitcom ‘Pretty Smart’: Release Date, What We Know So Far
‘Pretty Smart’ Netflix Release Date & What To Expect
Hannah Brown Admits She’s Hiding A Secret Behind Her Sunglasses
Kylie Jenner Showed Up NAKED To NYFW, But Is A No-Show At Met Gala
Joy-Anna Forsyth Dragged For Putting Her Kids In ‘Unsafe’ Situation