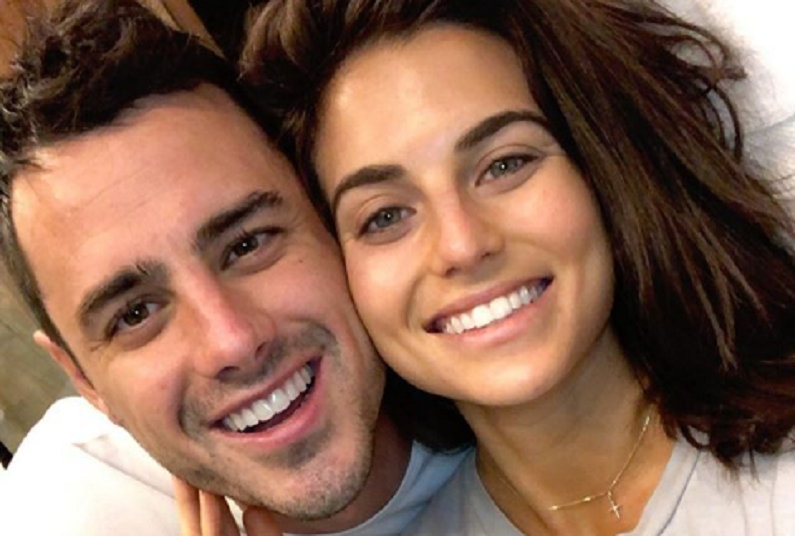 Bachelor Ben Higgins is off the market. He proposed to his longtime girlfriend Jessica Clarke. This is some great news for Bachelor Nation. The Bachelor franchise is currently on halt due to the coronavirus pandemic.

The proposal came as a surprise for everyone, including Jessica herself. Learn about the details about Ben Higgins’ “emotional” proposal and his beautiful fiancée.

Ben Higgins had a hard time keeping his secret

Bachelor Ben Higgins told People that he had a hard time keeping this secret. He almost gave his secret away to his girlfriend Jessica Clarke on Friday, March 27. Higgins was so “emotional” that he cried when he arrived to the location of his proposal.

It also didn’t help that Higgins was a bundle of nerves. His feelings started to rub off of Clarke, who started crying for no reason. Higgins said she cried because she saw him get emotional. She assumed he had bad news. But he quickly wanted to reassure her that this was a happy occasion.

“But then I told her why I loved her and asked her to marry me. She was so shocked!”

Higgins wanted to propose in Central Park as part of the The Bachelor Live On Stage tour, which was originally scheduled for March 21. Due to the coronavirus pandemic and increased social distancing, he had to quickly change his plans. Higgins settled to propose in Franklin, Tennessee. He wanted to propose as soon as possible, because he would’ve been “stressed out” if he waited longer.

Who is The Bachelor star Ben Higgins’ fiancée Jessica Clarke?

Learn the details about Higgins’ future wife. Clarke is a 24-year-old runner who competed on the University of Mississippi’s (Ole Miss) women’s track and field and cross-country team, as per People. Clarke’s athletic bio reveals that she loves to help people and has “stayed in a special needs orphanage in China for 10 days.”

She graduated from Ole Miss in 2018 with a bachelor’s degree in integrated marketing and communications, according to her LinkedIn profile. She works at Valet Energy in Nashville and is the co-owner of SweatNET Nashville and SweatNET Denver, two online communities that offer coupons for workouts.

The couple met back in 2018 when Higgins “successfully slid” into Clarke’s direct messages on social media. The two secretly dated for several months before making their relationship public in February 2019. While Clarke knew of Higgins when they first communicated, she didn’t watch his season of The Bachelor.

Both Higgins and Clarke are Christians. She quotes the Bible 1 Thessalonians 5:16 verse in her Instagram bio. Clarke announced their surprise engagement on Sunday, sharing photos of the intimate moment.

We wish Ben Higgins and Jessica Clarke all the best.

Savannah Chrisley Has A BIG Question About Showering & Storms
Artem Chigvintsev And Nikki Bella Celebrate Their Son’s First Birthday
Vernon Davis Discusses Biggest Hurdles On ‘Dancing With The Stars’
Run-In With ‘Friends’ Star SHOCKED Tyler Cameron & Here’s Why
Paris Hilton Joining ‘RHOBH’ Would Be ‘Hunky Dory’ With Fans, But Will She? Kathy Spills All