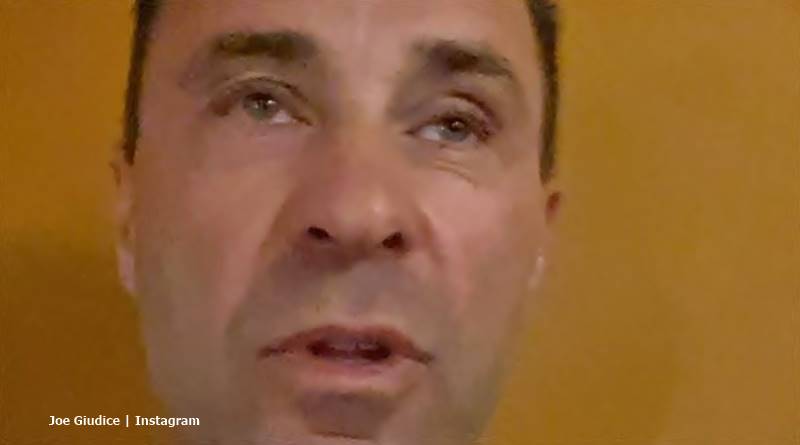 RHONJ star Joe Giudice shares with fans quite often about life in Italy with coronavirus lockdowns. He tries staying positive and helps with feeding his community. But things really trouble him now. That’s because he’s so far away from his family in the USA. Now he described being so far away from them as the “worst.”

RHONJ – Being so far away from his family’s ‘the worst’

TV Shows Ace reported that Joe Giudice tries a bit of walking around, taking care to stay away from other people. But it looks like now he stays in as much as possible during the Coronavirus lockdown in Italy. He donned an apron and helped out with preparing meals for his community in Italy. Joe’s staying with relatives in Italy, but it’s not the same as being home within the USA. Although he and Teresa split, he misses his daughters terribly. He took to Instagram and shared his feelings on the lockdown and the very scary numbers involved in the Coronavirus epidemic.

The short clip he shared is captioned, “No ADVICE… Just SAYin TY, mUch ❤️, STAY SAFE. In iT together noW we NEED ShIp LOVE to stop this.” In the comments that followed, Joe said, “this is getting real each day. it hit each country as of yesterday.” He added, “we need to encourage people it’s going to be ok! They all had a plan now we need to attack back be smart people do what they say.” It certainly looks like the RHONJ star’s realized the importance of staying home right now. But then he also talked about his family and the “worst” kind of worry.

Family is so far away, Joe notes

In the comments, Joe also talked bout how his family comes first for him. He wrote, “my #familyfirstalways #priority. this is worse than anything being far and worrying.” Actually, it’s hard enough to be in the USA and worrying about family. But being on the other side of the world must really be a burden on Joe Giudice. One fan responded to Joe, saying, ” Crazy, but NYC is a scary place right now. Pray for you and your family, my family and all around the world. ThNk you again.”

Another Real Housewives of New Jersey fan wrote, “Keep the videos coming @joe.giudice I’m impressed you are quite the inspiration 💙🇬🇧❤️🇺🇸.” Then, a RHONJ fan chided him a bit for going out at all. He shares from posts of him outside, so they think he should always stay in from now on. In fact, Bravo TV shared in mid-march that he has difficulty staying indoors all the time and likes to get into the countryside.

No ADVICE/ 🏷! Just SAYin TY, mUch ❤️,STAY SAFE. In iT together noW we NEED ShIp LOVE to stop this 🦠. #worldwideshipping📦✈️ #spreadlove

What do you think? Do you think Joe should never step outside his door? Even alone or with his Italian family? Do you think it must be very hard for him to be so far away from his daughters? Sound off your thoughts in the comments below.