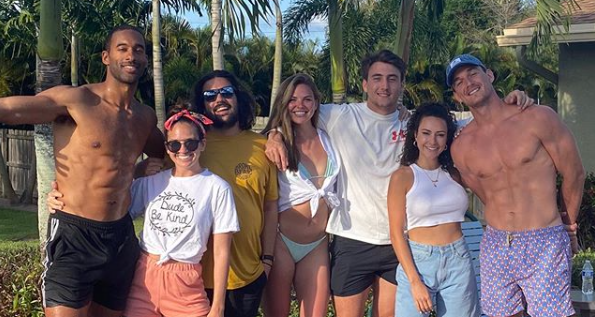 Tyler Cameron and Hannah Brown are the ship Bachelorette fans thought had sailed. Now that the two of them are quarantining with friends together, fans want to know if they are dating. Both have said they aren’t ready to date and are just friends supporting each other. Hannah’s brother suffered an overdose and Tyler lost his mother. Fans and stars of Bachelor nation alike have asked them, but they have yet to confirm anything.

We’ve seen them create Tik Tok’s and engage in challenges and dance-offs. Hannah even made a point to mention Tyler needed to, “put that thing away,” during one video. They are undoubtedly adorable together, but Bachelor nation really wants more. The two have trolled everyone the whole time, especially with videos where they play two-person spin the bottle. Now when asked point blank about their relationship, it seems Tyler wants to play coy.

What Did Tyler Cameron Say When Asked If They Were Dating?

They went live on a video where they worked out with friends and a fitness model instructed them over video according to E! News. When they took questions from followers one asked Tyler if he was dating Hannah.

He said, “me and Brown Bear are dating, yes, I confirm.” Hannah was also shown smiling while she nodded. However, Brown Bear is what they call friend Jacob Laham. That’s something Tyler himself shared on Twitter. He later mentioned in another question and answer section he would confirm Hannah was dating Matt, their quarantine roommate.

It seems they are still trolling fans about their relationship despite a lot of people wanting to know. Some have even gone so far as to tweet that the two of them quarantining together makes being inside a little more tolerable.

The Quarantine Continues For The Reality Stars

Fans have no clue how long Tyler Cameron and Hannah Brown’s quarantine will last. Sparks could rekindle in the time they have left. Being in the same house without the opportunity to leave and go places could help anyone grow closer together. They already know they have chemistry from their time together on The Bachelorette.

Hannah Brown flew down for Tyler’s mom’s funeral and then went back home. Soon, she was back in Florida wanting to be near Tyler in his time of need. As the fates would have it, a virus broke out that meant they had to stay together for a long time. Now fans can’t wait to see what happens and they also think the two need their own show just based off the videos.