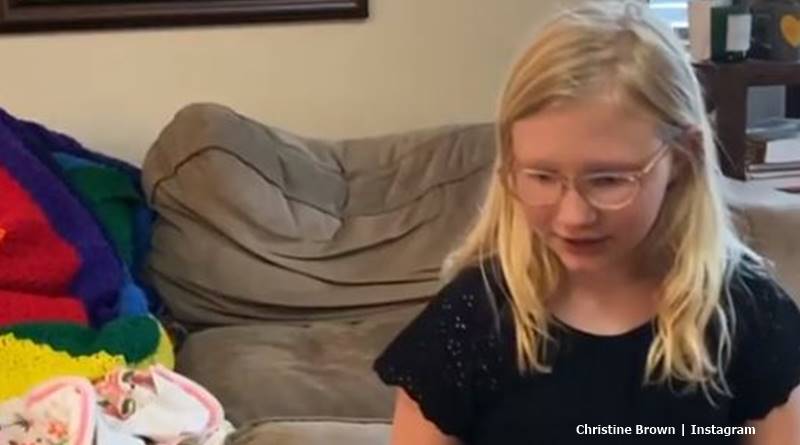 Sister Wives fans already decided that Christine Brown’s daughter, Truely’s a smart girl. That came after she told Kody Brown that it’s her body and she’ll make her own choices about what she does. That came when he forcibly tried to make her learn to ride a bicycle. But now, Christine commented that her daughter’s a lot smarter than she thought. Christine’s busy homeschooling Truely during the coronavirus social-distancing.

TV Shows Ace reported that Kody took the opportunity to teach Truely to ride a bicycle. It came when the wives all went off to Chicago. In the episode, he kept on pushing her to ride, without training wheels. That continued even after she told him she was scared. Finally, angry, she told her dad, that learning to ride should be her very own choice. In  fact, she told him off as it’s her “body.” Cheatsheet noted “It’s not fair at all. It’s my choice. This is my body, and I’m not gonna ride a bike.”‘

Plenty of fans applauded her for standing up for herself. It’s clear she knows that nobody makes her do anything with her body that she disapproves of. Most Sister Wives fans realized that Truely really is a smart girl who knows her own mind. Many comments on Twitter praised the young teen. As one critic said to Kody on the platform, “Whether it be s*xually, or mansplaining, or whatever. Let us think for ourselves. D*mn.” So, maybe Christine Brown shouldn’t be so surprised to discover that her daughter’s actually smarter than she thought.

Homeschooling reveals to Christine how smart her daughter is

Taking to Instagram on Friday, Christine shared a photo of herself and Truely working on math. She captioned it with, “Home School! It’s fun to help @truelygracebrown.” Then she explained she helps her daughter already with “homework.” Plus she said, “and I volunteer in her class I just didn’t realize how smart she is. And we’re figuring out Common Core Math!” Those parents who help their kids with Common Core Math agreed that it’s not easy.

One Sister Wives follower commented, “love the picture of both of you. I am a retired paraeducator from the Vernon, CT school system. We taught Common Core Math and found it to be quite challenging for a lot of students.” Then another one said, “She is such a unique little girl! Love her zest for life and her wonderful way of expressing herself!” Others commented on how they know Truely’s  a smart girl. One noted, “I’ve always thought she was smarter than her years !! Bless her she will go a long way 💕💕😉.”

Home School! It’s fun to help @truelygracebrown Even though we do homework and I volunteer in her class I just didn’t realize how smart she is. And we’re figuring out Common Core Math! #bonus #homeschool #coronavirus #selfisolation #commoncoremath

What do you think? Do you agree that Truely’s a very smart girl? Are you surprised that she’s actually smarter than Christine thought? Sound off your thoughts in the comments bow.