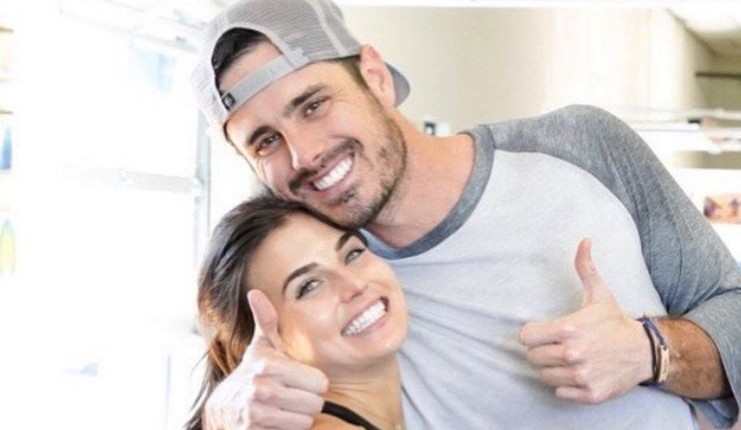 Ben and Jessica are getting married!

Ben says he had been planning the big proposal for months. However, the coronavirus pandemic changed up his plans, as it has pretty much everything. He spoke exclusively to Entertainment Tonight following the anticipated evening. Ben’s orginal plans involved proposing when he and Becca Kufrin stopped in New York City for The Bachelor: Live on Stage tour. Of course with everyone going on the show was cancelled. This forced Ben to rethink his proposal plans.

Ben and Jessica had been quarantining with his parents, but they decided to break up the monotony and go see her parents in Tennessee. He knew it would be extra special to her to have her parents there for his proposal. Jessica had no idea what was being planned, however, Ben did let her parents in on the big secret.

Ben shared all about the big proposal. He said, “I went back to a pond behind her house, and we had set it up with sunflowers near a bench. It’s right in their backyard, but a little hidden. I proposed and her family and mine were watching from a distance, and then we all celebrated together.

He continued saying, “I was super nervous. She’s my best friend, my partner and I love her. I was nervous to kind of do this whole thing in front of her. I wasn’t anxious, it’s just a big moment!”

Ben said he didn’t even make it to the spot before he started tearing up. This caused Jessica to tear up too. He said, “She said it was one of two things: either I was ending our relationship, which would have been a huge shock… or I was proposing.”

I don’t remember everything you said, but I know that I said yes. I woke up in a dream today and I get to live in this dream every day from now on (eeeep)

Obviously she was super excited and said, “I still just can’t believe it.” She actually almost ruined his plans when she said she didn’t want to get sweaty going on a walk before dinner. He convinced her. And she’s very glad he did.

Jessica said, “This is exactly how I would have wanted it to be. Central Park would have been magical and special in its own way. But it’s really cool that we just got to be together last night and not really have to talk to anyone else but my family. It was great. It was perfect. I couldn’t imagine it a better way.”

She went to Instagram to share a photo of the proposal. She said, “I don’t remember everything you said, but I know that I said yes. I woke up in a dream today and I get to live in this dream every day from now on (eeeep).”

Ben designed her ring with the help of a jeweler in Denver. It took roughly three months and he just got the ring two days prior to their trip to Tennessee.

Congrats to Ben and Jessica on their engagement. Bachelor Nation will be waiting impatiently for these two to walk down the aisle!